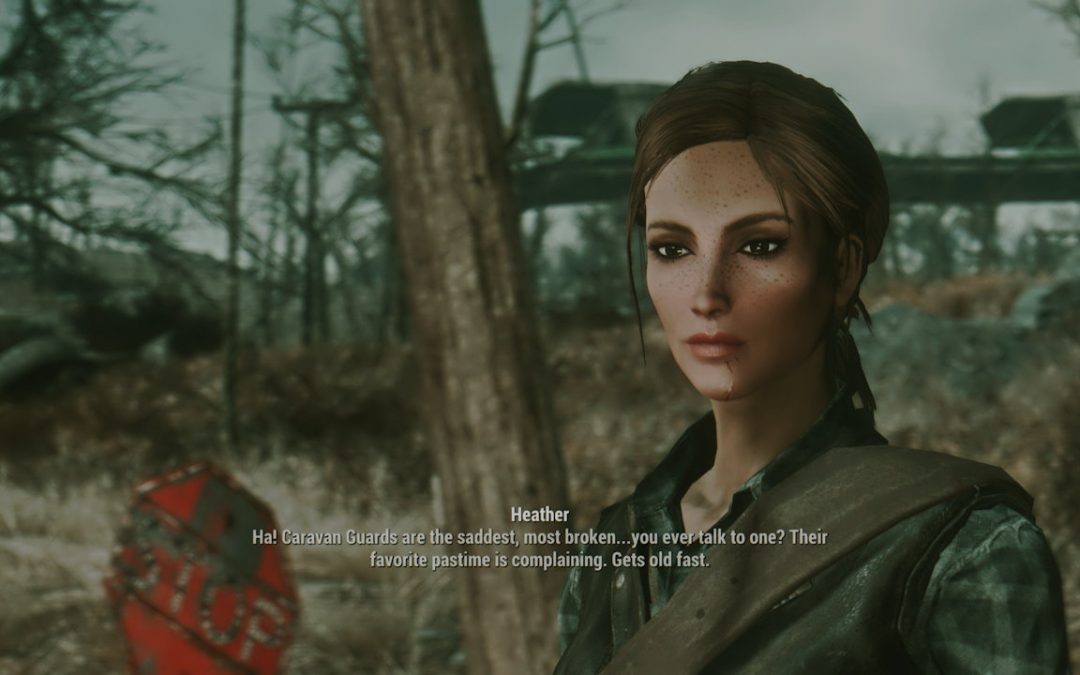 When Fallout 4 mods first started appearing on the Nexus, there wasn’t much to try as far as mod companions. Most were unvoiced and silent. So imagine everyone’s excitement when Heather Casdin, made by the author of the extremely popular Willow mod for Fallout New Vegas, appeared.

A little background there… I’d had mixed feelings about Willow back in the days of New Vegas. While technically what that mod did was far beyond any other companion mod on the Nexus, I felt a bit like Willow’s quests overshadowed my own at points. As some others pointed out, she also seemed (to me) a bit too clean, cute, and girly to believably be surviving in a desert wasteland. It was clear llamaRCA (the author) put a lot of work into the mod and I commend that, but I found I preferred other companion mods like Niner and Delilah more.

But Fallout 4 is a different game, and Heather Casdin, I hoped, would be a different experience.

P.S. Also check out some of my other mod reviews at the end of this post!

One look at the Nexus page for Heather and it’s clear that llamaRCA put the same commitment forth in making this mode as she did with Willow. The intro text states “over 1200 lines of dialogue” for starters, which far exceeded anything else on the Nexus upon release.

Some other notable distinctions:

Once again, Heather Casdin is the most technically robust companion on the Nexus. And since she can be used alongside any other companion in the game, and will interact with them (and comment about them) she fits right into the world easily. The mod is totally self contained. Heather uses CBBE as a custom body, but it will work whether you have CBBE installed or any other body mod.

Given my earlier comments about Willow, I’ll say right up front that I find Heather to be a much more believable person in this world.

Without spoiling anything as it relates to her quests, her parents were from the Brotherhood of Steel and she’s survived for years as a merchant selling medicine and goods she creates herself. And if you’ve been wondering given the last name, it does seem she’s related to Protector Casdin from Fallout 3.

Heather has a much more cynical, aggressive attitude toward raiders and the Institute than other companions, and especially compared to Willow. She’s kind enough that she makes sense with a ‘good’ player character, but also bloodthirsty enough to fit with a more ruthless play through.

The voice recording quality is pretty solid, though there are certain bits (like when she melee attacks and lets out a grunt) where the mic distorts and makes it clear she’s a mod. However, these are seldom and in general I think the author did a great job as a singlular modder without a whole recording team like Bethesda had.

The voice acting itself is decent. It isn’t as compelling as Piper or Nick Valentine generally, but also isn’t so flat or bad that your attention is drawn to it. Some of her taunts against mutants are funny. Heather makes a lot of comments in a lot of locations, which makes her more immersive than vanilla companions because she reacts to so many things that happen.

Early game I loved a line she said after Sturges tells us he needs our help getting through a door to a fusion core.

She says, “They expect us to believe… that that guy can’t hack a terminal?” It’s especially funny because Sturges is in the middle of hacking a terminal when you first meet him, right before that dialogue happens.

Her default laser rifle is a little overpowered if you pick her up early game. This didn’t bother me though since you can equip her with anything else and it will also have infinite ammo. Giving her a basic 10mm pistol instead makes her viable without overshadowing the player early on, for example. Give her any gun and a little ammo and it will be infinite for her, which further expands the range of options.

Speaking of recruiting her, I like that the mod adds “Heather’s Console” as a craftable item. This means while first arriving in Sanctuary in the beginning you can build this computer terminal and set her to hired without having to travel all the way to where you normally find her. (Role play it like she was in Sanctuary and you met her there.)

Note that doing this will bypass her normal dialogue when you meet her, so I recommend it for repeat play throughs and not your first time. Still, I think that’s a great feature and I haven’t seen that implemented with any other companions. Otherwise, you can find her near the cemetery in the middle northern area of the map.

Heather Casdin also features an optional romance path during her quest line. That’s fairly fleshed out and more “complete” than vanilla companion romances — you can even give her your spare wedding ring and she’ll acknowledge it. What I also like that the author has done is given clear dialogue options where if you’re role playing that your character is still grieving their spouse and not ready to romance someone else, it’s set up clearly for you to say so.

One minor gripe her is that it’s actually part of the dialogue that your character has to at least seem apprehensive about romancing her at first when she asks if you’re still in love with your former spouse.

If you were looking to role play that your character has dealt with the grief and put it behind them, you can’t simply say that. Still, a small thing.

I’ve used this mod on and off in various play-throughs since its release. As someone who is always experimenting with new mods and removing old ones, my games are more prone to crashes than others. And yet I rarely experience any issues period, and none that I can trace back to this mod.

As far as I can tell the mod works with basically any weapons, armor, or body mod. None that I’ve seen conflict with the area that this mod designates as Heather’s bunker.

The only time I’ve had an issue is with another mod causing Heather’s radio quest early on not to play, but that was corrected by setting Heather’s mod to load later in the list. The mod author also notes a compatibility issue with Better Companions by Tech Prince.

I’ve replayed Fallout 4 many times, and can say that since trying Heather Casdin she ends up on a lot of my play throughs. Even if I only travel with her for awhile and I ultimately trade her out, she fits so well into the world she makes sense as at least part of my character’s journey. She seems like a character that belongs in the wasteland, and believably survives within it.

She’s a complicated woman who has has to overcome some hardships that have left her vengeful and cynical, which I find refreshing against brighter and bubblier companions like Piper, Curie, or Deacon. Heather acts like someone who’s seen some stuff in her time, a survivor looking for someone she can rely on.

Heather’s quests seem to align with yours pretty well, and it’s a good partnership where (without spoiling much) you’re both after Kellogg. I didn’t feel like her quest overshadowed mine like I did before in New Vegas with Willow, which I think is a nice improvement.

Did I mention she’s a merchant? Dialogue menus allow you to trade with her like a normal companion ORRRR open a shop interface where you can buy and sell with her. Handy for when you’re lugging a lot of loot you’re going to sell anyway – you have a walking shop with you anywhere as long as she has the caps for what you’re unloading.

Also, I personally hate hacking terminals in the game, so her ability to handle that for me is super useful.

I’d give Heather an A. Very well developed, great tie-ins to the world, custom quests, and tons of dialogue that shows growth from New Vegas’ Willow. The author put a lot of work into this, and it shows.

Other Fallout Mods To Read About: