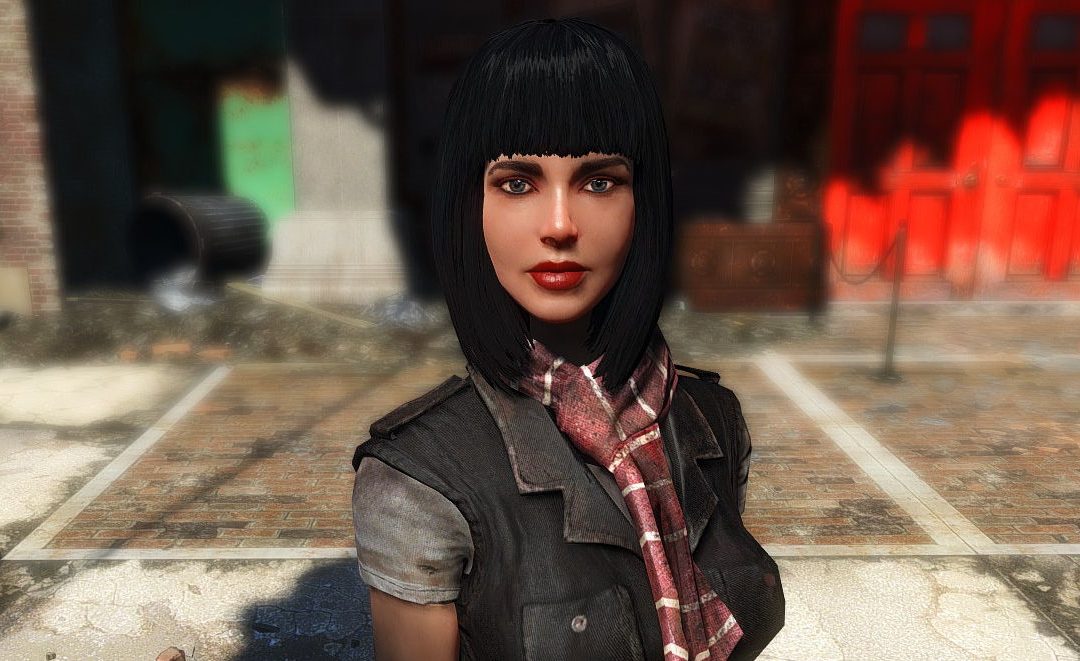 Next up in the series of Fallout 4 mod reviews is Wastelander Barb. This mod found its way to the Nexus fairly early on, and was updated a few times to add features before seemingly being finished.

I say finished that way because the mod author had mentioned other features to come in future updates in the Nexus mod description, but the mod has not been updated (at the time of writing this) since May 21, 2018. It’s unclear if the mod will receive further updates, especially now with the release of Fallout 76. However, the mod as-is has a good amount of features, which we’ll discuss below.

Barbara is a companion you can meet on your way into Concord quite early in the game. She uses the game’s Boston Female voice and has over 320 lines, with the mod author being fairly judicious about which ones are used when (so it fits).

The mod description says it requires Mod Configuration Menu (MCM), but that’s primarily for adjusting settings such as how often she makes idle contents, follow distance, etc. I can confirm that otherwise the mod functions fine without MCM. If an update has complicated your use of Script Extender, which is needed to run MCM for instance, it won’t break this mod. This is often the case for me, where it feels like F4SE is broken more often than it works, so I tend not to use any mods that require it.

Barb herself has some cool features:

Thoughts on Traveling With Barb

My overall impression is pretty positive.

I’ll begin by saying I find her default weapon a bit overpowered considering how early you run into her (probably level 1-2). She has a fully auto 10mm pistol (basically an uzi), and given that she has unlimited ammo with all guns she can make a lot of battles trivial instead of entertaining. However, after swapping it for a pipe gun I had at that point and giving her a bit of .38 ammo, having a little extra fire support and knowing I didn’t have to keep an eye on her ammo was perfect.

Another thing I want to mention off the bat is the she starts with 3 frag grenades (which are also infinite) and killed me several times lobbing them carelessly. This is easily fixed by trading with her and removing them — but a caution. Any explosives you give her are also infinite, which can be cool if you want her to be a Molotov-tossing fiend, but be careful.

I like her interactions in general, and thought it was a nice touch that if you’re near settlers or friendly NPCs she’ll occasionally talk to them. Once I rolled up in Oberland Station also traveling with Dogmeat, and Dogmeat walked up to her panting and she greeted him with “Well hey there, pup!”

It was a cool moment that felt authentic and added to immersion.

She doesn’t have a whole lot in her dialogue trees generally speaking since her voice files come from the vanilla game, so obviously Barb is not as extensive as Heather Casdin in this regard.

However, as a lightweight companion mod with some useful features (like auto-stimpaking you when your health is low) Wastelander Barb does not disappoint.

You can even use her alongside Heather if you want since neither one counts as a companion. I would advise, though, any time you’re using multiple companions to either crank up the difficulty or take care what kinds of equipment you give them. Otherwise your group will probably steamroll most things in your path and the game can get boring.

(I personally like to stick with weapons with plentiful enough ammo that it makes sense the companion could be stocking and finding it themselves to explain the unlimited ammo. A little personal headcanon.)

Barb’s default outfit makes sense given her background (see mod description). Roleplaying-wise I think she also makes a lot of sense in the utility overalls outfit (that Sturges wears).

While Barb’s dialogue isn’t extensive, the benefit of the author using vanilla female settler voice files is that the voice recording is high quality and well matched to the rest of the Fallout world, unlike the custom recordings of some companion mods.

She has some cool features, like stimpaking the player, that I haven’t seen anywhere else, and since she manages her own ammo and doesn’t take up a companion slot, she’s easy to swap in and other of any adventure.

This is definitely one of the cooler mods I’ve seen on the Nexus. I’d give Barb a B+ that could easily be an A with more content.