When you’ve played New Vegas as many times as I have you need some new content to keep it interesting. Fortunately this game and its predecessor, Fallout 3, have a very active modding community. I recommend the Niner companion mod if you haven’t tried it — read my review at the link. Another one I’d like to share is Delilah Mojave MD. 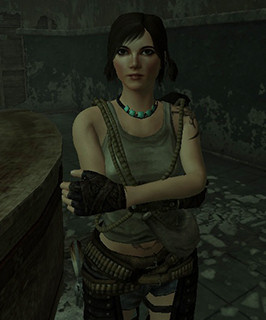 As the mod description indicates Delilah is a fully-voiced companion that has a lot of comments on various areas and folks you’ll encounter throughout the game. She has an unmarked option side quest as well as a larger overarching quest, which is to become a full-fledged wasteland doctor.

You meet her in Goodsprings in the house next to Chet’s shop, which means she can join you literally after you leave Doc Mitchell’s if you like. This is a plus for me, as in most RPGs I like to form my group as early into the game as I can. If you don’t want a companion that early, you can always visit the town at any later point. While I like the voice acting itself, the recording quality of her voice isn’t great, which can be a bit distracting. Many users had the same complaint, which spurred an alternate voice set to be created. I recommend this also, as this adds much higher quality voicing for her that is much more immersive while you play.

Her tie-in to Doc Mitchell and to Sulik (from Fallout 2) is a nice touch and really makes her feel at home in the Fallout world.

Delilah comes with custom armor, but the DT is average for early game. I consider this a plus, as many companions come with overpowered equipment. In her case when you need better armor it’s not difficult to give it to her, but you’ll know what she starts with is decent. She has fairly low starting health, something she even mentions in dialogues with the player. This makes sense for a doctor who is more defensive, as she’s not meant as a tank.

Her default weapon is a .357 revolver, which strikes a pretty good balance of being useful enough to contribute without stealing all the player’s kills.

She can craft a couple unique food items in the beginning with useful effects, and her main quest involves finding various wasteland doctors and learning techniques from them. Without spoiling where you find them, she can learn to do things like cure radiation poisoning, heal injured limbs, remove poison, and cure chem addictions. This is a super useful skill for your group especially if you’re playing in hardcore mode where limb injuries are harder to fix.

Her medical skills useful, but I also really like the idea of a companion with a specific skill set. When I think of a “real” band of wasteland wanderers/mercenaries I imagine there would be a medic in the group, just as there might be a survival expert/utility guy and a combat expert. By default most companions fall into the combat role only, which helps but can be less interesting.

I’d give Delilah an A-. What’s here is well done, unique, and not buggy. I love the concept, and if Delilah had a bit more content she would easily be a tie for the best companion in New Vegas in my opinion (with Niner).