Both New Vegas and its predecessor, Fallout 3, have enjoyed an active modding community. From new weapons to new missions, lands, and even characters that can join you. The depth and complexity varies from mod to mod, and I’ve tried quite a lot of them in the years of replays on this game. One in particular I found worthy of sharing is Niner. It’s a popular companion mod at the New Vegas Nexus. 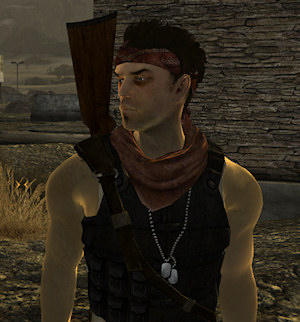 Niner is a refreshing alternative to the vanilla companions for a few reasons.

He’s headed to New Vegas, which conveniently coincides with your own mission in the game. The first couple small quests he adds take place in the NCR caravan base (where you meet Cass) and Nipton, so it seems designed to work well alongside a typical progression. He will comment about even small things and people you meet, which gives Niner a sense of life outside of the relatively silent mule/bullet shield aspect of the vanilla companions. The voice acting is pretty good and the recording quality is on par with vanilla NPCs, which I would call excellent compared to many of the NPC mods available.

Niner’s custom clothing/armor is pretty cool, and if you add the “more Niner” component the mod author supplies in beta the progression of his gear will change over the course of his quests. Niner also comes equipped with an unlimited 9mm SMG, which seems a bit overpowered for how early you get him. This is especially true since it’s unlimited. If you’re playing on the PC, though, you can do what I did and force remove it from him via console. I could be mistaken, but I don’t believe I saw a dialogue option to have him un-equip that like some companion mods have.

As mentioned earlier, his track seems designed to correlate with the typical path a player takes down through Primm, through Nipton, and up to Novac. His main quest line finishes shortly after arriving in New Vegas proper. Some have complained about this, but keep in mind that he’ll have completed several smaller quests prior to this point. This is still more than you’d see with any of the vanilla companions.

I like the amount, personally. It’s enough to give him a place in the world of New Vegas without being so much that it overwhelms the game a bit. Other mods, such as Willow, are full-featured to a fault in my opinion. The mod author clearly put a ton of work into her, but certain points can feel more about errand-running for Willow than the player’s own quest.

In contrast, Niner strikes a good balance of adding material without stealing the show.

The sound quality of the voicing is solid – comparable to any NPC found in the vanilla game. This allows Niner to fit right in as a natural NPC. The dialogue itself has a nice flavor to it. He has a lot more personality than vanilla followers, with the exception probably of Cass. Some players may be turned off by his use of recreational drugs and such, but I’ll note that with the exception of a few set points where he makes it known he’s doing it up, it’s not that obtrusive (i.e. it’s not like it’s all he talks about).

A lot of his quest-related dialogues only offer the player one choice of what to say, which makes it feel like less of a dialogue and simply a forced exchange. This would be one area that could be improved upon. When there is a choice there are generally two options: agreeing with him or showing disgust toward whatever prompted it. I don’t know if the mod author was working in a mechanism to get him to get off drugs etc. if the player discourages the behavior enough times. That option has never come up for me.

I find his personality a refreshing change of pace in general, as he seems like a guy who has your back and is happy to consider you and he a team.

I’d give Niner an A-. There are some areas for more development, but generally speaking this is a well put together mod that I got a lot of enjoyment from, and he was a part of all my play throughs after using him.