Do The Work, Don. 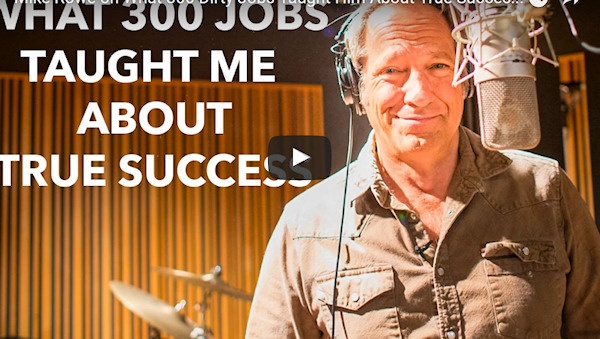 Work smarter, not harder — the worst advice ever given, said Mike Rowe of Dirty Jobs on a recent podcast with Lewis Howes. As a piece of advice I’ve lived by for so long I was shaken and immensely curious for his explanation.

I’ll recap a key part of it and recommend that you listen to the interview. It’s long, but great.

The main idea is this. That saying implies that hard work and working “smart”, or efficient, are separate and opposed to each other. This leads people to think that an education opens doors into “smart” jobs with easy work.

Rowe shared an experience with his high school guidance counselor that told him that adage, and told him he was being stupid to pursue liberal arts and find what he was interested in when he “had so much potential.” “You don’t want to end up digging ditches do you?” Aside how funny that is now given what Mike Rowe has done, it also implies that the only people who need to work hard are those not smart enough for a “smart” job.

But even when you’re working efficiently and intelligently, even from a position of education, success is still borne of hard work. Thinking that being smart is a shortcut to avoid hard work leads to interesting consequences. (Also thinking that smart = educated…)

So much of what we advocate now embodies that: wouldn’t it be better to work less hours, retire sooner, make cash from your couch? All messages framing work as this terrible thing we should all avoid.

There are over 5.5 million available jobs as of September 2016, according to the Department of Labor, and 70% of them do not require a four year degree. Yet as a society we’re convinced that sending more people to college will solve unemployment. Rowe pointed out, having asked so many business owners why these positions weren’t being filled, that most of them told him “No one is willing to hit the reset button, to learn something new, and to relocate to do it.”

It seemed plausible for where we find ourselves these days, and certainly of my own life.

Early on, making high grades without ever studying made me lazy. It’s one thing as long as you can keep pulling that off, but then college came and the work was suddenly dense enough that I had quite a rude awakening. And I didn’t have any study habits in place because I’d never really done it, so I found myself behind everyone else for a bit — others who were used to hard work.

In arrogance I’d thought that cleverness could shorthand everything. It didn’t register in college or for years after. I built a lot of value in jobs when I played efficiency expert, driven by a desire to shorthand things and save time. It seemed useful, but it only fueled my illusion that being smart was a sidestep to getting one’s hands dirty.

That haunted me for years and I never truly knew why.

I’ve studied successful people for years looking for patterns. Those of you who may have followed my blog for awhile have watched me dig into it. From life coaches to entrepreneurs, from adventurers to artists, though each successful person’s advice varies, do you know the one common pattern in all their advice?

Be willing to do the work. Work harder than anyone else.

Even when I was being productive, the real significance of that didn’t click for a long time. All the mundane stuff, the planning, and doing something greater than ourselves are part of the journey. Even if we could cut straight to the chase and do only the most “worthy” stuff, we’d probably then turn around and say it’s monotonous because it’s all we’re doing.

There’s a scene from Mad Men that stuck with me. Don Draper, a former creative director at a reputable ad firm, was almost fired for being drunk at work and blowing a big account. His former protege is now his manager, and she has him writing taglines for a commercial. He leaves early, goes home, and gets drunk and calls his sponsor (a friend who is a recovering alcoholic) and complains to him that a creative director reduced to doing taglines is pathetic and he’s not going to do it.

His friend points out that Don had indeed put himself where he is, and the only way out of it is to show his partners he’s gotten his shit together. The only way to do that is to do the work.

“Do the work,” Freddy repeats.

It’s easy to fall into self pity or convince ourselves that we’re better than the work we’re doing. This entitled feeling makes us lazy or ineffectual. Successful people seem to be ones that are willing to push the other BS aside and just do the work, and that drive outperforms being smart and lazy every time.