V-Moda M100 For the Modern Audiophile? 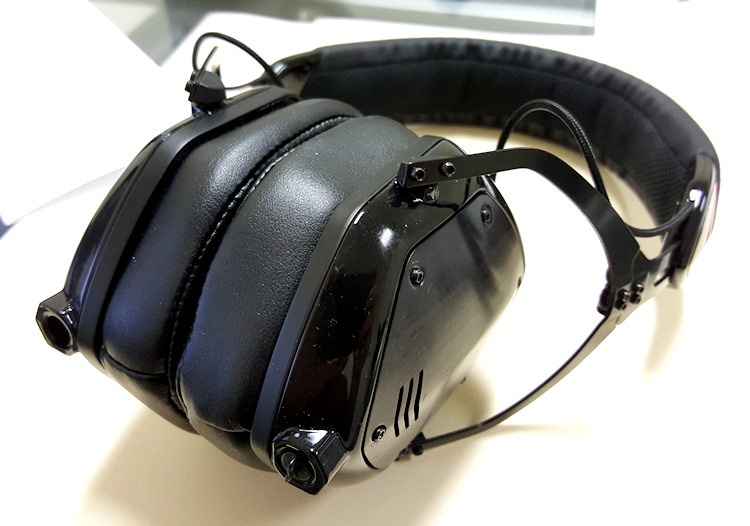 Recently I got my hands on the V-Moda LP2s and reviewed them, and was fortuitous enough to swap up to the M100s shortly after for a good comparison. As V-Moda’s flagship headphone I was excited to see what the fuss is about with the M100s.

My experience over time was mixed.

Two big comparisons I’ll make throughout this review are to the LP2s and to the Denon AH-D5000s that I’ve lauded. The Denons ran at a different price point, but have ended up being the standard to which I judge other cans I slide on in terms of sound.

The design of the M100s is visually almost identical to the LP2s. The same XL earpad upgrade will work on either set. The M100s are built to fold up, however, something the LP2s don’t do. This allows them to fit in an even more compact hardcase provided with the headphones, which is great for shoving in a bag while traveling.

Speaking of the hardcase, it comes loaded with two headphone cables ending in 1/8″ plugs, a carabiner, and a 1/4″ adapter. One headphone cable has a microphone and volume control built into it, whereas the other cable is simply longer (6 feet). Both cables have a 45 degree angle plug at one end that works well with phones, iPods, and laptops.

The metal frame of the M100s is probably among the most durable of headphones I’ve worn. They’re far better traveling headphones than the bulky Denon AH-D5000s and other full size cans, and their clamping pressure holds them on your head better for moving to the music.

As an on-the-go headphone these are solid. I’ve brought them with me around town many times, and even took them on a cruise.

The Sound: Better Than the LPs, But…

While the M100s have a clearer sound overall than the LP2s, to their credit, their overall detail, particularly in the mids, is lacking compared to other well-regarded headphones in a similar price range, such as the Beyerdynamic DT 770.

The mids in the Beyerdynamic headphones is also somewhat recessed, but features far more detail.

The bass is strong and punchy on the M100, and is generally pleasing. The bass response does taper off a bit on sub-bass frequencies from say 25-40hz compared to other bassy headphones I own, including the Beyerdynamic DT 770.

It wasn’t obvious to me how much so at first until I did A/B listening against the Beyers with the V Modas, but on some electronic music and modern rap the lack of body at the lowest frequencies is noticeable.

But load up a song with a good beat and you’ll be tapping your foot.

Overall sound is darker than the Denon AH-D5000s, but there’s still a crispness in the treble that I’ve found enjoyable.

In addition to the somewhat bloated upper bass and weak sub-bass, I feel the two real shortcomings of the M100 are sound stage and comfort.

These headphones have a very “in your head” sound to them. Stereo imaging is very left and right, as opposed to music and instruments feel like it’s coming from all around you. Again, it’s quite noticeable when you compare against headphones with a wide sound stage.

To me this makes music less engaging and more clinical.

The stock earpads that come with the M100 are too small to be comfortable for more than 5-10 minutes, and set your ears pretty much right against the driver and harshens the sound a bit, in my opinion.

This is improved with the XL earpads which I’ll talk more about next, but in short I still don’t find the M100 comfortable for longer listening sessions.

The clamping pressure begins to make my ears ache, and the headband has minimal padding for how thick it is, which always hurts the top of my head after about 25 minutes.

I mentioned it in my LP2 review and it bears mention here. If you find the clamping pressure a little tight you’ll definitely want to consider the XL earpads. In my opinion they make a worthwhile difference in comfort.

Note that my photos here are with the XL earpads. If you want to see how they headphones look stock visit my LP2 review since the outside of the headphones are basically identical.

I think the M100s work well across all genres. They’ve been criticized for not having a flat, neutral sound, and it’s true. If you want a more sterile, “accurate” sound these aren’t for you. But in my humble opinion, the M100s have a fairly fun, engaging sound.

There are certainly more comfortable headphones at similar price points, but it seems with the V Modas you are trading that comfort and some sheer musical fidelity for durability and features like detachable cables, one of which that is included has a built-in mic.

If these are your entry point into higher end audio they’re a fine choice. There are more refined sounding headphones, though, such as the Beyerdynamic DT 770s that are both more comfortable and have a much wider sound stage.

The fact that the V Modas do not require a headphone amp is handy, and they can be driven adequately out of a phone.