The Limited Gain of “Limited Time” 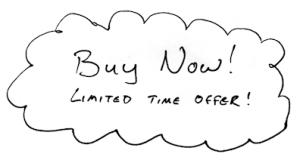 Yes yes yes… marketing research shows that people are more willing to buy — and buy in greater quantity — something that seems scarce or fleeting. It explains why “for a limited time” is so prevalent in packaging and advertisements. But unless there’s a clear reason to limit the product’s availability, such as holiday-themed drinks at Starbucks, I would challenge that you’re up against a different set of odds.

People like stability, especially with goods they purchase regularly. McDonald’s became what it is today largely because they standardized their menu and any customer at any McDonald’s can walk in and know they can order certain things. You know you can expect these things, so you know the moment you see the golden arches what you can expect within. The whole approach would fall apart if random stores stopped serving things.

Several years back Burger King did a study where they told customers at certain locations that they no longer carried the Whopper and filmed the responses. People freaked. Sure, that’s a staple menu item as opposed to one they were upfront about being limited, but it still supports the theory of customers being attracted to dependability. And how would Burger King have developed the Whopper into a staple if they kept discontinuing it as a limited occasional treat?

Not in all cases of course, but I know when presented with a “limited time” product I’ve had the reaction of “no sense in trying it and getting hooked on it just to have them take it away in five seconds.” That same scarcity discouraged me from making a purchase at all. That or customers don’t always take the artificial scarcity seriously as it’s such a widely used sales gimmick. A seemingly nonstop barrage of “buy now!” deals that close and are immediately replaced by a new one only trains customers to wait for sales because there will reliably be another one. Now you’ve almost guaranteed that sales and special offers will “work”, because it’s the only way to hold their interest.

I realize that “for a limited time” is a great way to test market a product. If it doesn’t do well, it’s easy to take it away without drawing attention because it was, after all, temporary. It’s a nice safety net against failure. And if it does really well? No one will object when you announce it’s a permanent menu item.

The ad will rave about how exciting and amazing the product is and why people should hurry out to get it before it’s “gone”. Yet limiting its run can inadvertently communicate a lack of confidence in the product if it’s obvious you’re testing its impact.

This is different in cases where the item is always available but the sale price is what is for a limited time. As mentioned above, though, that can give confusing metrics about the success of the product if sales are used too often. I may have bought that product merely because it was cheaper than a similar one and not because it’s such a great new alternative.

Focusing on profit isn’t the only way to make a profit.

Too often people justify certain business decisions with the logic “You’re in business to make money; therefore that has to be the primary goal in all decisions.” I suppose that’s true and it’d be naive to think that businesses altruistically are about their customers first and the revenue second. However, it does seem shortsighted to think that quick and immediate sales spikes are the only thing to build a business on. In the long game, serving the customer is always a better strategy.

And hey, you can still do this even if the executive team are only concerned about profit. If putting processes and a culture in place that fosters happy employees and loyal customers makes you more money, why wouldn’t you do it? Even in the worst case where you don’t actually care about people, building a corporate culture that functions as if you do can still be profitable. The problem with focusing on quarterly figures is that it ignores the long game. Will sales and initiatives you do this month hurt your figures eight months from now? That’s that quarter’s problem, right?

“But we increased new business 15% and only lost 10% of old customers. That’s a net gain of 5% so it’s a win!” No. New customers are more expensive to acquire and you don’t want detractors out there in the market, so in this example losing 10% of old business for a paltry 5% is a loss.

There is no real scarcity on the web.

The original thinking of scarcity marketing was to spur customers into action, which worked when their options for where to obtain those products was much more limited. In today’s world of online shopping and local businesses being easier to find than ever with any device, it’s arrogant to assume customers have to come to you to get that product.

Do you think you’re the only restaurant to offer a chicken sandwich, the only clothing store to have stylish summer clothes, or the only retailer to carry that new gadget?

Widget A is on sale for a limited time this month? That’s great if I happened to be looking for Widget A right now. But if not, the odds are good I can find a good price on Widget A elsewhere when I am ready to buy, so that scarcity is harder to create.

Impulse buyers are not generally loyal customers. The same gimmicks that brought them to you today will bring them to your competitor next purchase, so relying on this approach means constantly marketing to new customers and not up-selling existing ones. In most cases marketing to your existing customer base is cheaper and more reliable anyway. Just as it’s generally wiser to focus on communicating why your product is better or more useful than why you can sell it for less.