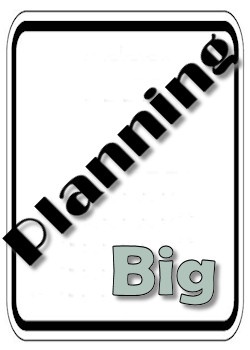 Many business folks plan conservatively – myself included – thinking that it’s better to be realistic than over-plan and under-deliver. The Strategic Coach Inc. founder Dan Sullivan disagrees. “Some entrepreneurs still think that 10x is too daunting or overwhelming to think about,” says Sullivan. “For those people, even growth by 2x may seem like a stretch.” (Sullivan 20)

Incremental changes seem easier to accomplish but don’t help as much. Setting bigger goals that are further out can clarify certain decisions because it calls into focus people, services, and projects that don’t align with the end point. Increasing productivity isn’t always a matter of asking yourself “What aren’t I doing?” but rather by asking “What shouldn’t I be doing?”

Sullivan points out that a 2x change is something that can usually be accomplished without changing much about our core business. Trimming a few edges to increase efficiency with our current capabilities is usually the first place we look. A 10x growth plan, on the other hand, requires some big changes in creativity, systems, and resourcefulness. In this way you can be at the forefront of change rather than struggling to keep up.