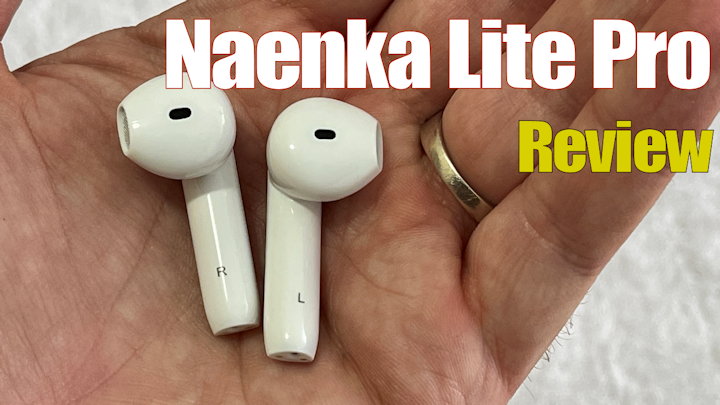 I’ve recently gotten far more active as far as daily walking and running goes, so having a good set of wireless earbuds is a need I hadn’t considered in years. As an owner of version 2 of the Airpods, I was interested to experiment with some alternatives when the opportunity presented itself.

At half the price of the Airpods (often $130), the Naenka Lite Pro seem like a worthy challenger at a glance.

They feature a similar portable charging case, bluetooth 5.2 connectivity via AAC and APTX, and even offer a “game mode” capable of 0.05 second latency. For comparison, Airpods slot in a 0.2 seconds, and that extra decimal is a pretty big difference when it comes to latency.

There’s a lot of similarity between the Naenka Lite Pro and Airpods in these regards. They both pair by opening the lid of the charging case near your phone, they both have dual mics for some degree of noise control, and they both allow for “Hey Siri” functionality at any time while wearing them.

The Lite Pro do have 7 hours of battery life versus the Airpods’ 5 hours.

On the Naenka Lite Pro, you can adjust the volume at any time by tapping on the outside of the earbud. Left for volume down, right side for volume up. Double tapping advances tracks, and triple tapping takes you in or out of game mode.

They seem pretty comfortable to wear, and as long as you push them in good so they’re seated properly in your ears, they seem to stay in well during a run. The one time I went for a run and the left earbud fell out was because I’d pretty casually put them in my ears. They didn’t fall out again afterward when I put them in more carefully.

For walks and regular activity, they fit easily and stay there.

The bass of the Naenka Lite Pro is good for an earbud. It doesn’t play quite as deep as the Airpods do, which surprised me at how low they play for earbuds. But at the price point, the sound is on point. If you have an EQ to brighten up the highs or extend the lows a little further, all the better.

Speaking of EQ, that’s one other distinction to make for iOS users. The “headphone accommodations” area of the Settings menu in iOS has, in my opion, some good options for headphones like the Airpods where it’s beneficial to exchange some dynamic range for enhancing frequencies that don’t stand out as well without.

For me, using Balanced Mode with the Airpods makes them sound clearer and punchier. Unfortunately, the headphone accommodations settings are only available for Apple headphones.

That’s not a fault of the Naenka, but rather a limitation of iOS. The same is true for iOS not having a system-wide EQ setting like many Android phones do. (People reference the one in Music, but that only applies to Apple Music and not any other source of audio.)

Pairing, Charging, and the Case

The case charges via USB-C for easy accessibility, typically between 45 minutes and 2 hours depending on how low the case’s battery gets. Like the Airpods, as long as the case still has a charge it will charge the earbuds when they’re inside.

Pairing is easy, though slightly different than with Airpods on iOS. For the Naenka Lite Pro, you simply go into your Settings, then Bluetooth, and open the Naenka’s case. It should show up as an available device, and from there you simply tap it. It’s straightforward and simple, and much like you’d do it for PC or on Android.

Naenka’s product info says the bluetooth has a range of 20 meters, which seems pretty accurate to me. I’ve left my phone on my kitchen table and have been able to do laundry and carry it across my house, or head out to my garage, with no issues.

Even when I let my dog out into the backyard I can get all the way to the edge of my yard with no signal loss, which is probably pretty close to 20 meters from the phone.

The signal does drop off pretty quickly after that point, though, which isn’t unusual for bluetooth.

You can check the battery level of the Naenka Lite Pro through settings in Android or via the battery app on iOS. You can also check the level while the earbuds are inside the case as long as the case lid is opened.

With the Lite Pro you can see what I’d guess is the average of the battery life between both earbuds, expressed as one reading. The case does not show up in the battery widget. However, you can still keep track of when your case needs a charge with the LED on the front of it. It will flash green when the case is opened if it has a good amount of battery left, and orange when it’s getting low.

As a far more affordable option ($59) for TWS earbuds than Airpods, Naenka delivers a lot of value at the price point.

They handle phone calls and meetings well with good vocal clarity, doubling easily for on-the-go music and gaming with easy touch controls for when your phone is in your pocket.

The USB-C case charging makes them accessible for gear you probably already have, allowing them to integrate seamlessly into your routine.

Naenka was kind enough to sponsor my video review, and has given me a promo code I can extend to you to save 17% on anything in their store. If you’d like to try the Naenka Lite Pro yourself, click this link to use coupon code ‘dmpro’.

That takes an already great price and makes it even better as a thank you for reading this. Cheers!