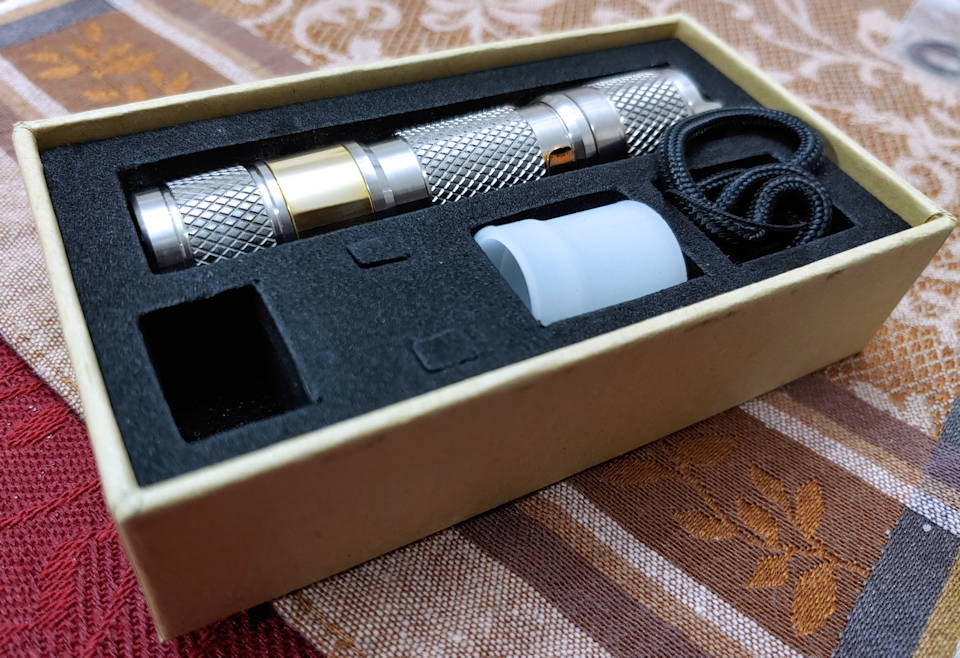 I’ve owned the little brother of this light, the Tool AAA, for about 5 years. When I saw this one I wondered: Would the Tool AA still fit nicely in a pocket or mount well to the bill of a hat? Would the extra capacity of an AA battery — especially given that the Tool AA can accept 14500 lithium ion batteries — prove useful?

I put it through its paces, and there’s a lot to like about this flashlight.

First, the obvious and well-stated benefit of using a common AA battery you could find anywhere in a time of need. This light offers great flexibility in this regard, since you can use any basic alkaline battery as well as rechargeable NiMH AA batteries for better run times.

And you can also use a 14500 li-ion rechargeable battery for a big boost in brightness at all modes. (There are 4 primary brightness modes plus a strobe.)

That’s the most flexibility I’ve ever had in a flashlight in terms of how I can power it. For an everyday pocket light, that’s fantastic.

First off I’ll say that in general I’m not a fan of having more than 3 modes. In the past I’ve found it tedious to switch through so many modes when I tend to realistically only need a couple. This is particularly so for a pocket flashlight.

I could see the value in having SOS mode and strobe for larger, tactical flashlights in the collection, but I tend to prefer not having to bother with them in a pocket light.

For me, a medium-ish 20-100 lumen level and a high level for when you need a lot of light quickly tend to cover all my typical flashlight needs.

For the Tool AA 2.0, though, I have to say that this is overcome by two things:

While it’s impressive that a small pocket light can produce 650 lumens in Turbo mode using a 14500 li-ion battery, I want to point out that the bezel gets HOT very quickly. I had it in Turbo mode shining around various trees for probably 30 seconds, and I brushed the bezel with my index finger briefly and it was stinging hot to the touch.

Obviously there’s only so much heat sinking you can do in a small flashlight, but if it can get that hot in November when it’s 40-50 degrees Fahrenheit, I would be reluctant to use Turbo for long in the summer months.

Luckily, I find the High mode still provides a lot of light with either battery configuration (li-ion or NiMH). It’s notably brighter and wider than Medium mode, and doesn’t get quite as hot as Turbo. (Still pretty warm, though.)

Also worth saying that on Low and Medium modes the light didn’t even seem to get warm. If you’re using those levels for situations where you’ll have the light on for 10 minutes, or an hour or more at a time, you shouldn’t have any noticeable heat.

It’s nice to be able to hit those much higher lumens in short bursts when you need to with a pocket light, though, and I ultimately don’t consider that a big knock against the Tool AA 2.0.

After all, if you’re going into a situation where you know you’ll need big lumens for longer periods of time, you’re probably bringing a bigger light anyway.

For me I’ve got a couple other li-ion lights in 18650 and 26650 sizes that can sustain 500-1000 lumens for a few hours, so those would be my go-to for boating at night, being in the wilderness, emergency situations, and security applications.

For an everyday pocket light I’m primarily looking for something that can help me look under the couch for something, light up my way as I let the dog out at night, or give me a decent field of few (and detail) for evening walks. The Tool AA 2.0 does those things very well.

Here are a few beam shots in the garage on different modes, then we’ll talk about the Nichia LED:

Pretty much all the LED flashlights I’ve owned up until recently have used a cool white CREE LED. It seemed standard for me and I never thought much of it.

Recently I’d tried the Lumintop IYP65 which also featured a Nichia LED and was surprised and very impressed at how much better everything looked. The light has a daylight color tone, and you’d be surprised how much more “realistic” everything looks when it’s dark using this kind of emitter (versus a cool white).

The downside I’ve noticed so far in looking at the specs of this light as well as a few others is that Nichia LEDs seem to either have less sheer lumen output or worse battery life than CREE.

For flashlights offered in both configurations, you can often compare the specs and see this difference.

However, in my opinion the trade off is worth it for enhanced light quality and perceived detail.

For larger lights where you may be shining on further away objects you may opt for CREE’s higher lumen outputs, but I find for a pocket light where its use is primarily up close objects the Nichia makes a lot of sense.

Brightness is generally higher on all modes using a 14500 lithium ion battery, though if you look at the specs this is often at the expense of runtimes.

People have worked out the math and shown that energy storage is overall pretty close between a NiMH AA and a 14500 — you’re largely swapping more amp hours for lower voltage, or 3x higher voltage and lower amp hours.

It’s a little reductive, but you could say that NiMH battery usage is ideal for flexibility and long run times, whereas 14500 usage is your “performance mode”.

Low and medium modes are a bit more robust on lithium ion, and while the turbo mode is powerful with either battery, the 600 lumens of the lithium ion are certainly nice.

Like I mentioned earlier, though, heat is a real issue with this light. Turbo mode usage should be brief using either battery, lest the light become uncomfortably hot in your hand.

The medium mode becomes ample for most tasks with the 14500 battery, though the tail cap glows blue when the light is off and has the 14500 in it.

My opinion on that is mixed.

On one hand, when walking into the backyard at night and pulling the flashlight out of my pocket, it’s nice that the illuminated tail cap makes it easy to know where to put my thumb in the dark to turn it on.

However, if you put the flashlight in your pocket and aren’t wearing thick/dark pants, the blue illumination can glow through them.

If that’s a concern for you, you’d be best to stick with NiMH batteries since the tail cap does not illuminate with them.

For overall mixed usage as an EDC light I’ve not noticed a big difference in battery life between the two battery setups.

I like the versatility of this flashlight, and its output is broad enough for 80% of what I generally use a flashlight for. I suspect that would be true for a lot of people as well.

The titanium finish makes for an attractive light and I’ve had people comment about it.

The light suffers from some heat on higher modes that may work against your uses if you think you’d need a lot of output for 20 minutes or more, rather than a minute or less to check something. YMMV.

The mode switching is excellent — probably among the best I’ve used. All in all, it makes a great EDC light at the base price (non-titanium).