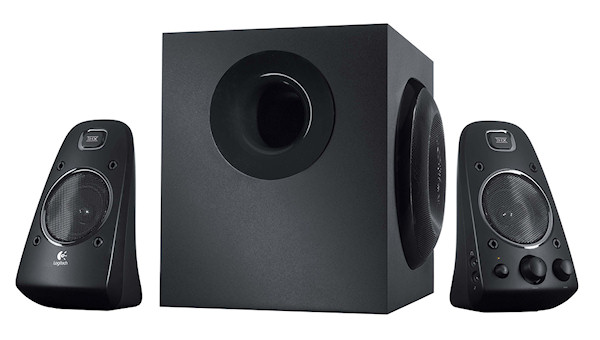 If you’d told me years ago that a single mid-tweeter cone with a phase plug could compete with a dedicated mid-range and horn tweeter I’d have said you were crazy. The Logitech Z623s pack a lot of punch into a small package, perfect for music enthusiasts working at a desk for much of their day.

First, a run down of what this 2.1 speaker set includes.

Pretty similar setup to the Klipsch Promedia 2.1, which bears mentioning here since at this price point these are the two most heavily compared sets. I’ve actually used the Promedia 4.1 set for many years at my desk, and use Klipsch RB61 reference bookshelves in the living room, so I can certainly draw my own comparisons well. And if you’re about to point out that comparing a 4.1 system to a 2.1 isn’t fair, I’ll mention that I was primarily using the front 2 speakers only (desk space limitations).

One other thing to mention off the bat is the multiple inputs the Z623s offer. Apart from the standard 3.5mm plug that they come with, there are also R/L RCA inputs on the sub box and an additional 3.5mm input on the right satellite. This makes it easy to add on-the-spot peripheral devices like a phone, iPad, or music player. If you do use these speakers with a TV, having multiple inputs is always useful in that setting.

My experience in listing to the Z623s is primarily in my home office, fed from either my laptop or peripheral device into a Behringer mixer. I use the mixer both as a headphone amp and as a level control pre-speakers. The speakers are slightly elevated with my desk setup, putting them roughly at face level rather than ribcage level pointed up. Much of the music I listened to them on consisted of high bitrate mp3s (256kbps+), AAC files at 256kbps, or FLAC files.

Hardly a ‘professional’ listening environment, but this setup seems more or less what desk speakers at this price point are geared toward.

Impressions of the Z623

The first thing that struck me about these speakers is the in-your-face sound they have. If you prefer a more laid back sound these might not be for you. The mid range seems a little bright to me, and I found that EQ’ing 2kHz – 4Khz at -3dB helped smooth it out to prevent listening fatigue. That said, vocals and acoustic guitars are clear sounding and I was impressed at the presence in the treble given that there is no dedicated tweeter in this set like there is with the Promedia.

I’m not sure if this is due to an improvement in speaker technology in general over the years or an individual win in the design of the Z623s, but in my opinion there’s an impressive amount of detail from a single driver unit in each satellite.

Other reviewers of the Z623 criticized the volume and bass controls being on the right satellite. Apparently the Z2400s, the predecessor of the Z623, had a central control pod that sat in the middle if your desk for easy adjustments. That’s a matter of opinion, though, as most 2.1’s I’ve owned have followed the volume on the satellite style. Frankly, my desk is cluttered enough without another set of wires for a separate control pod, so I actually consider the satellite setup superior.

Instruments sound great at this level, from the saxophone of songs like Gerry Rafferty’s “Baker Street” to melodic acoustics like Clapton’s “Layla”. It can be tough to achieve the same level of stereo separation that you’d normally get with a home theater system while using desk speakers (because of how close together they are), so I’d place the Z623s on par with the Promedia in that regard.

Tracks like The Eagles’ Love Will Keep Us Alive and Pink Floyd’s Goodbye Blue Sky sounded particularly clear and well-represented, complemented well by the hearty vocals. The lush lower end of the Z623’s subwoofer works well for inducing foot-tapping on familiar hits.

Sound depth and imaging are good but not great, but that’s largely to be expected with computer speakers. I don’t find much use in some reviewers constantly mentioning how much better a home theater system sounds in those regards because they are not the same thing. It’s like saying a Shelby GT500 has more balls than a Toyota Camry. That’s not why you’re buying the Camry. The goal with a set like this is to create a solid listening experience in an environment not specifically set up for perfect acoustics, and both the Promedia 2.1s and the Z623 do this well.

I can close my eyes and get a general sense of the sound stage on most tracks — of course this is also dependent on the engineering of the album. This is one area I think the Promedia set sounds better, likely due to the dedicated horn tweeters. The sound stage seemed wider with those, where it’s a bit more focused and centered with the Z623.

The subwoofer is no slouch, providing a very warm, deep bass. It lacks some of the tightness of the Promedia’s sub, but definitely hits harder and lower. Occasionally on those really low notes the Klipsch Promedia 4.1s reminded of of the limitations of a 6.5″ sub. Don’t get me wrong, those speakers sound great, but I don’t get as much a sense of it being a small sub in the sound of the Z623. What’s particularly impressive about this comparison is that I’d previously used the Promedia 4.1, not 2.1, meaning the sub had two 6.5″ woofers rather than one. I assume this is a victory of cabinet design and port tuning for the Z623.

The bass knob has a notched mid point you can feel as you turn the dial at 50%, which I found a good level for most listening (that or a 10-11 o’clock position just below 50%). I tested it against classic rock like Eric Clapton and Led Zeppelin, harder music like Korn, Metallica, and Tool, and various pop and rap songs and its performance was solid throughout. The bass response was warm without being overpowering on most tracks, and ample on thumpy tracks that called for it.

I didn’t turn the volume all the way up (they’re loud enough to hear well elsewhere in the house at 50%) but even when playing pretty loud neither the satellites nor the subwoofer sounded like was straining.

Some have criticized the fact that the sub cuts off at 120hz, which is a bit high for a subwoofer. Many systems cut the sub off at about 85hz, for example. I don’t innately consider this a weakness, since it is paired to small satellite speakers. 3″ satellite drivers tend to have a hard time with midbass the way a larger 6.5″ or 8″ home stereo speakers thrive, so the sub support can be beneficial. On some tracks, such as those found on Bad Meets Evil’s “Hell The Sequel” album, the higher bass did bloat a bit at these frequencies and felt slightly off kilter with the climb up into the satellites’ territory.

Compared to the Klipsch Promedia 2.1 set, the Logitech Z623 has a bit more of a forward sound that feels punchy and musical. The Klipsch has a more laid back sound to my ears — in the mids particularly. In terms of instrument detail the Klipsch may come out slightly on top where imaging and separation are concerned. But the difference isn’t as noticeable as I’d expected. The Z623 has a superior sub in my opinion. Most grant that it’s louder, but some argue that it’s also muddier. I agree that it isn’t as tight as the Promedia sub, but is a delight if you like a rich, deep bass as you listen. I still found its bass accurate enough to be enjoyable, and the added power (to me) more than makes up for the slightly looser sound.

Everyone’s audio tastes are different. What sounds great to one person may not to another, so whenever possible always audition speakers for yourself before making a decision. The purpose of any review is not to make you say “Wow, I guess I’ll get those!” Really, it’s to give a reference point to keep in mind as you compare to other options. You may not like a sub this strong or a forward-sounding presentation like this, and if so you’d be better suited to try the Promedia set or another altogether in a similar price point.

When I selected headphones a few years back, many reviews mentioned the Denon AH-D5000s had strong bass and bright highs, and even when some complained about that I took at as a plus since I tend to prefer that sound coloration.

As far as a Promedia 2.1 vs Logitech Z623 argument goes, I’ve owned both and enjoyed them both. They’re both great sounding for the price point as PC speakers. If you’re a fairly casual listener you’ll probably think both are awesome. If you’re something of an audiophile looking for a compact office listening solution when you’re away from your big system, these are still quite viable in my opinion. I’ve been having a blast listening to all kinds of different music on the new Z623s, and I think on the whole I slightly prefer the Z623s. But I’d be happy to use the Promedia 2.1s again all the same.

If these sound like the speakers for you, buy them direct from Amazon!