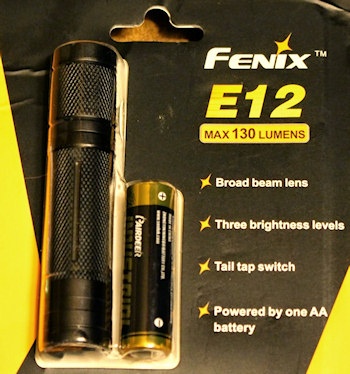 As the successor to the excellent Fenix E11, the E12 takes the proven versatility of AA flashlights and brings some new features to the table.

The Fenix E12 features the same anodized aluminum frame its predecessor used. This is a durable and corrosion-resistant material that has become pretty common with tactical style flashlights. Unlike the older E11 however, the E12 sports a flat tail cap that allows it to tail stand in a sort of “candle mode”.

The frame has some aggressive knurling in the center area for improved grip even in wet or damp conditions. It feels good in the hand, and is pretty light weight for pocket carry. Included lanyard makes it easy to draw it quickly. There is no pocket clip, however, but for me this was not a detractor as I don’t use them.

The E12 features an updated Cree XP-E2 LED with the usual lifespan of 50,000 hours. Users can flip between three modes by pressing the tail switch halfway to toggle between. Many tactical lights that feature different output modes controlled digitally also include a strobe and/or SOS mode, but they aren’t a big loss for a small light.

Like the E11, this light has a pretty wide beam with a central hot spot. The reflector tube isn’t as long as bigger flashlights of course, which gives it a shorter throw distance. Still, it creates usable light to roughly 20 meters in medium and high modes, which is enough in most situations.

Having three brightness modes might be superfluous for every day situations, but it does broaden the light’s functionality a bit. The low mode is great for reading at night or for when the user only needs a little light to see but doesn’t want to bother others. The medium mode is probably what you’d use most of the time because 50 lumens strikes a good balance between battery efficient and plenty of light for most circumstances. The high mode creates an impressive beam that does a great job of lighting up the yard or street while walking. For an AA pocket flashlight, 130 lumens is impressive.

While a great light, if you already own the E11 this may not be enough of a lumen increase to warrant replacing your current light. If you’re looking for something new or want a fantastic all-around pocket light, though, I would definitely recommend it.

Fenix took everything that was great about the reliable E11 and gave it a few new niceties. Adding an output mode and changing the tail cap shape, to name two, go a long way to making this pocket light a better all-around contender than ever. I own a couple more powerful lights (2x AA and li-ion), but I found I used them far less often when I got the E11, and that would certainly remain true with the E12.

Ready for the perfect pocket companion? Check it out on Amazon.com: