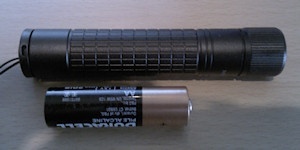 Between a great sale with free shipping and some saved up Amazon Reward points, I was able to score this light essentially for free after reading some favorable things about it. After using the Fenix E01 as my EDC light for some time, my first impression of the E11 was that it looked a lot like a blown up version of the former. I realize AA’s are larger than AAA’s, but the light seemed bigger than I expected. 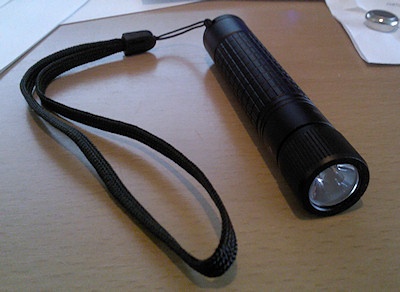 Fenix’s literature says the E11 has two modes: 32 lumen and 105 lumen, with run times of 8.5 hours and 1.8 hours, respectively. Not bad at all for a single AA flashlight. The effective range is listed at 70 meters. It uses a Cree XP-E LED, with the usual Cree lifespan of 50,000 hours.

Initial Impressions of the Fenix E11

As I inserted a Duracell AA battery (not included) and screwed the cap on, it became clear that the tail clicky was apparently set to “on” in the package. Luckily the light was pointed away from my face.

The 32 lumen mode is plenty for poking around under your desk, checking out a closet, or even navigating your house in a power failure. I shut myself in a dark bathroom and turned the light on facing the ceiling, which produced usable light throughout the whole room. It’s a shame the tail clicky does not allow you to stand the light up on its own, as it’d serve a variety of purposes well in this configuration.

Outdoors the E11 produces ample light for walking in areas with little or no lighting. My typical evening walking light is an Olight T25 tactical on medium mode, which is 45 lumens, so the E11’s 32 lumens isn’t far off. Switching to the E11’s high mode of 105 lumens creates a nice powerful flood that really illuminates an appreciable area in front of you. Since switching modes can be accomplished easily by tightening or loosening the bezel slightly, it’s easy to hop back and forth or quickly go to high mode in an emergency situation.

Though the packaging says the E11 has a range of 70 meters, I’d place it more at 30-40 meters. I’d thought 70 seemed high for such a small light, but it still lights an impressive distance for a single AA. Because this light doesn’t have the same hotspot that many others do (more of a flood beam) it makes pinpointing the light impact at a distance more challenging. Pocket lights aren’t known for being great throwers anyway, though.

Check out the updated version of this flashlight on Amazon — the Fenix E12!

Build quality seems excellent, especially at the $25-30 price point. The packaging says it’s made of Type III anodized aircraft grade aluminum, so it should be both impact and corrosion resistant. Most serious lights these days do seem to be made of aluminum.

The AA battery fits nicely in the tube and does not rattle. I find this refreshing, as it’s a gripe I’ve had with my Olight T25. The light feels very solid, albeit a little heavy for a pocket light. The manual does not state whether the lens is plastic or glass, and I couldn’t tell by looking at it. Hopefully it’s glass for a pocket light (less scratches), but at this price point I wouldn’t be surprised if it’s plastic. The light is a nice, pure white, which is a nice contrast to the bluish or greenish tint many other lights at this price point tend to have.

The light comes with a lanyard (shown in my picture above), as well as a spare o-ring and rubber tail switch.

The flashlight has two modes: a low “every day” mode and a high mode. When the head bezel is screwed all the way in the light functions in high mode. Loosening it slightly (about a quarter turn) toggles to low mode. The light is turned on and off by the tail switch, which is a forward clicky design with momentary-on functionality.

This light does have the constant brightness regulator common to most higher-end flashlights, meaning you won’t notice  a dimming of the light output until the battery is basically dead. It is also waterproof to IPX-8 standard of 2 meters. The E11 does not have an anti-roll body, but seems to stay in place pretty well with the lanyard attached.

Overall Impressions of this Fenix Flashlight

Some users have criticized the light’s low mode, saying it should be more like 10 lumens for longer run time. This would be okay for a map light and light tasks like the Fenix E01 I’ve carried for some time, but I will say that 32 lumens is much more usable on walks and such outdoors, and 8+ hours run time at that level is still respectable.

I really like the tactical tail switch for any light that has multiple modes. I had a Maratac AAA light a ways back that was turned on by twisting the head, but this was also how you cycled through modes. This was a pain because each time you turned the light on it’d be one level beyond whatever you had it on last, meaning you’d have to manually cycle through all modes with every use to retain the same level as before. In the setup the E11 has, I can keep the bezel at whatever level I want it at and it will always turn on the same way as before. This isn’t an electronic memory effect like Olight and others use, but functionally it’s just as good.

The E11 is definitely bigger than the E01 and other AAA lights (below), but is still perfectly viable as a pocket light without being too bulky. Though there are many other pocket-sized lights that are brighter or have longer run times using CR123 batteries, I like the idea of using a battery as universal as a AA for an every day light. I do own lights that use CR123’s and li-ion 18650’s, and they’re fantastic, but I wouldn’t want to be out somewhere and have it die on me and have no way to reload it.

Overall I think the Fenix E11 is a great every day flashlight that lends itself well to pocket carry. Its two power modes make it suitable to most situations, and its tail switch allows it to be used tactically. Find this flashlight on Amazon.com here!