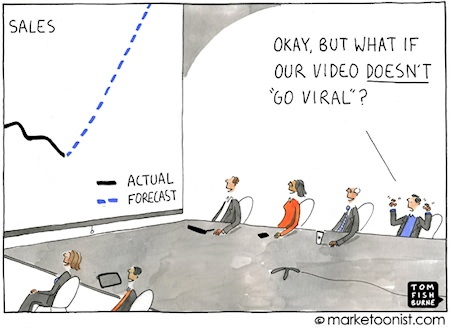 Everybody wants a viral marketing campaign. Some will pursue it with the fervor of Loch Ness, and finding success at it can be just as elusive.

The truth that many marketers don’t want to admit is that no one ever knows a given video is going to “go viral”. Think of all the TV commercials you’ve watched over the years. How many of them stuck with you or were worth repeating at the water cooler? Probably less than 1%. Yet when each one of those ads was created, the makers obviously expected them to do well. After all, why would anyone run a deliberately ineffective ad?

Since very likely less than 1% of TV commercials had a lasting impact on you, that means 99% of them failed to be memorable.

Making wild sales forecasts based off the assumed potential of an ad is kind of like buying a new shirt for an interview and then putting a down payment on a Ferrari you’re sure you’ll be able to afford with that new salary.

Think about it: if anybody could say with certainty what would go viral they’d be the most famous marketer of all time. Not even the esteemed Steve Jobs got it right every time.

Have you ever asked yourself why fortune tellers and psychics don’t play the lottery? Seems like it’d be a sure thing, right?

This doesn’t mean video marketing is a bad strategy, as it can be fantastic for the right type of business culture. It also doesn’t mean going viral is impossible and is therefore not something your business should aspire to. Just don’t delude yourself with unrealistic expectations. Instead, make your marketing strategy based off of hard, quantifiable metrics. And if you’re going to go with your gut, admit that you’re up against a lot of others with their fingers equally crossed.