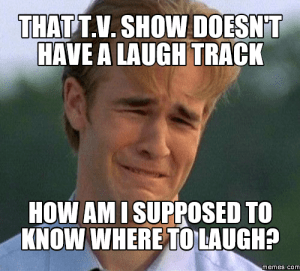 Remember the old TV shows that would say in a voiceover “this program was filmed in front of a live studio audience” during the credits?

That was often to explain the laughing you’d hear at the sitcom’s jokes, which back then were apparently live laughs and not tracks laid on top of the action. But what’s the big idea behind the laugh track, and is it really needed?

History of The Laugh Track

The laugh track was created in 1946 to accompany radio programs. Since much of our communication is body language, people thought that it was difficult to determine funny parts without being able to see the speaker. Because of social influence, the idea was that by hearing other people laugh it would reassure the listener that it was indeed funny and okay to laugh at that part. This eventually found its way into television as a method of reinforcing jokes, but producers noticed that studio audiences weren’t always reliable.

For example, sometimes they’d laugh too loudly or for too long, which made moving on from the joke stilted. Other times, the audience wouldn’t laugh much at a joke. Sound engineer Charles Douglass spurred the technique known as “sweetening” by manipulating the recording of the studio audience to better suit the show. He muted the laughs after a couple seconds if they went on too long, and increased the volume of parts where the audience didn’t laugh enough at the joke.

Makes you wonder: if performing in front of a studio audience is something of a test market and the joke tanks, why the writers wouldn’t scrap the joke and make a better one? I guess relying on social psychology to persuade people into thinking it’s funny was easier.

In 1965 CBS took the same program, Hogan’s Heroes, and split it into two versions. Separate audiences watched the base version and the laugh track added version, and the results were pretty clear. The version with the laugh track fared much better than the one without. As a result, using laugh tracks became the standard going forward.

But Is The Laugh Track Actually Necessary For Humor?

A lot of shows manage to be funny without a laugh track. In CBS’ The Mentalist Tim Kang, who plays agent Cho, is known for his deadpan humor. The show doesn’t use any laugh tracks, but his ability to catch us with a one-liner remains intact. But hey, that’s dry humor that by definition isn’t as accessible, so let’s find some other examples.

An IndieWire article by Matt Schimkowitz takes on this very issue, noting shows such as The Office, Arrested Development, and Curb Your Enthusiasm all did well as comedies without insisting upon the laugh. Other comedies like 30 Rock avoided the laugh track because each episode was so densely loaded with jokes the track would be obtrusive and wouldn’t be able to keep up.

That and, we’ve all had funny friends that could make us laugh without a crowd of people laughing along to reassure us it was indeed funny. So humor obviously does exist outside of communal activity.

However, I won’t argue that a laugh track does change the way we perceive what we’re watching, whether it actually enhances humor or not in all cases. Example? Check out this video of a Friends episode with the laugh track removed. Ross’ social awkwardness shifts from humorously endearing to pretty creepy without that reassuring laughter.

The Trouble With Network Comparisons

To support the idea that laugh tracks are necessary, we frequently find comparisons of “lesser” shows without laugh tracks to much more widely watched programs — you guessed it, with laugh tracks. “See?” the comparisons seem to say, “the difference is clear.”

The trouble is that the success of a TV show hinges on more than simply how objectively funny it is. How charismatic are the primary actors? How well-marketed is the show? Is it shown in a time slot appropriate for its key demographic? When we use ratings or viewership as “proof” of this concept it gets unreliable. After all, a lot of lazily written shows enjoy 5+ seasons while smart ones get cancelled because they don’t find their niche.

Indifference, or When The Laugh Track Detracts From Humor

Standup comedy is a medium for which a “laugh track” is built in. A comedy special is almost always filmed on stage in front of an audience, allowing you to laugh along with the crowd whether you’re physically there or watching on TV. But have you ever laughed loudly at a joke that the audience didn’t really react to? Or how about when the audience goes nuts after a joke you didn’t think was funny? I’ve experienced both many times, and in the latter case hearing the audience laugh did not change my unfazed expression at a joke I didn’t think was funny.

That doesn’t necessarily prove that laugh tracks are useless; how do I know some of my laughs in shows like Friends weren’t influenced by the laugh track? But it does show that an auditory reinforcement isn’t necessary to determine humor, and that you can’t force someone to laugh at something they genuinely don’t think is funny.

Okay so what about times when a laugh track actually detracts from the humor?

In this video edit of a Big Bang Theory episode, we can see where adding more laughter becomes overbearing. Sure, this is a deliberate overuse of the laugh track. But it makes clear by comparison to a regular episode how too much can hurt. Some shows that a lot of people enjoyed, like Seinfeld, grew to using a laugh track after practically every line of dialogue in some episodes. It may not be as obvious when you’re watching it for the first time, but if you own the DVDs and are re-watching the show it can feel tiresome. This was a point raised in comments to articles I’ve read on this topic, and I tend to agree.

When it’s used that frequently it begins to feel like a crutch and not simply a reinforcement. Not so much “here’s a way to build up this funny joke” but more of a “how can we get a laugh out of this bad writing?”

It’s not surprising when so many sitcoms reuse tired cliches, with most of their characters playing out predictable archetypes. People say that what’s wrong with reality TV is that it has no plot since there’s no written script, but I’d argue that a lot of shows that have scripts don’t offer much more in the way of substance. As much as I enjoy crime shows, for example, most of them are entirely procedural, which makes them linear and sometimes predictable. It may look like they’ve caught the bad guy, but if you know you’re only 15 minutes into the episode it spoils it for you because there’s no way (given the crime show formula) that the case is solved.

If it were a free-flowing crime show you wouldn’t be sure. Maybe they did wrap this bit up that quickly, but who knows what’s going to happen next?

The laugh track plays upon human history and social psychology to enhance comedy, and was created to capture that communal part of us that connects through smiles and shared laughter. It can change the way we perceive what we’re watching, how we connect to certain characters.

With the Ross example mentioned earlier, the laugh track focuses his awkwardness to come off as goofy, something we’d look at and say “That Ross…” with a chuckle. Without that cue, his same behavior makes him look like a creepy weirdo.

When it’s well done, the laugh track can be subtle and act as a guide for a deeper comedic experience. But is it truly a guide or a crutch for bad writing? Should we take comfort that producers are making the humor more accessible for our benefit, or should we be offended that they apparently don’t think we’ll get the joke without being given permission to laugh?