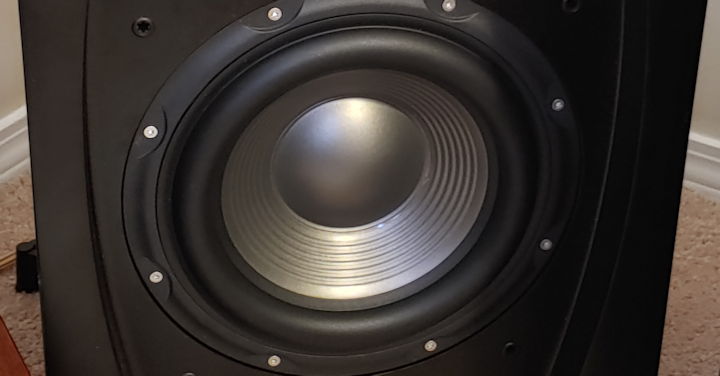 I’ve have a JBL 550P for about 4 months at this point, but only used it for a few days of that time until yesterday. Reason being: I encountered the same issue others reported where there was an amp issue that caused a loud 60hz buzz when the unit powers on, even with no input connected to it.

But the issue persisted (mimicking a ground loop) even on circuits no other amps or electronics had issues on. By the time customer service got back to me about a potential exchange it’d already been weeks and I’d disassembled the box trying to solve the issue myself.

I was curious about powering it manually with my Crown XLS power amp, since it seemed the JBL’s amp was the issue. It was.

It sounded decent, but the shortcomings of a small 10″ woofer seemed apparent even with the Crown’s ample power output. What if I could put the speaker in a ported box?

Rather than construct a new box like I had for other speakers, I wondered if I could reuse the 550P’s box since it’s very well built with 1″ thick MDF and a great internal bracing system.

The box’s internal airspace was already ample, and according to some calculations I’d done, should be large enough for a ported design.

Having removed the original amp and back plate that came in the box, I was left with a rectangular hole.

I knew I’d need to construct some kind of new back plate, and if I was going to do that… I could install a port easily into that without having to cut into the finished box itself.

Longer term I could paint the MDF plate black to more closely match the rest of the box, but short term since it’d be on the back and no one would really see it, I skipped that bit.

And so I came up with this — a plate that would overlap the rectangular gap by about 1.25″ on all sides to accommodate screws and form a good seal. As you can see in the picture, I made a 2″ hole for the speaker terminal and a larger hole to accommodate a spare 2″ port I had to use.

Ideally this job would’ve involved a 3″ port for the low tuning frequency I was going for (27hz, right at this woofer’s low end cutoff) but wider ports need longer tubes and I was already low on internal length I could work with.

Once everything was installed on the back panel, I was ready to attach it to the back. But first, I added a little Polyfill to the box (slightly more than it had by default) to increase the de factor air space to closer to what it needed to be for a 6.1″ long port to reach the target tuning frequency.

(The screw placements were a work in progress until I edged the side ones in properly to overcome my making the hole slightly too large in parts to take the screws.)

Unpainted it’s not pretty, but it sized out perfectly, screwed on tightly with no air leaks, and converted the box to something that could be connected easily to an external amp.

The result? A fair bit louder overall and a significantly fuller low end. Sounded like a totally different speaker, and given the excellent build quality of its box I actually think it ended up sounding better than the Infinity Kappa I’d been using in a custom ported box. Also impressive given that the Kappa is a 12″ sub.

In various demos over the course of all types of music, the port satisfying added to the sub’s thumpiness, yet the 10″ woofer was still tame and fairly agile for upper bass like what’s found in Massive Attack’s “Angel” that I’ve heard fall apart on other subs.