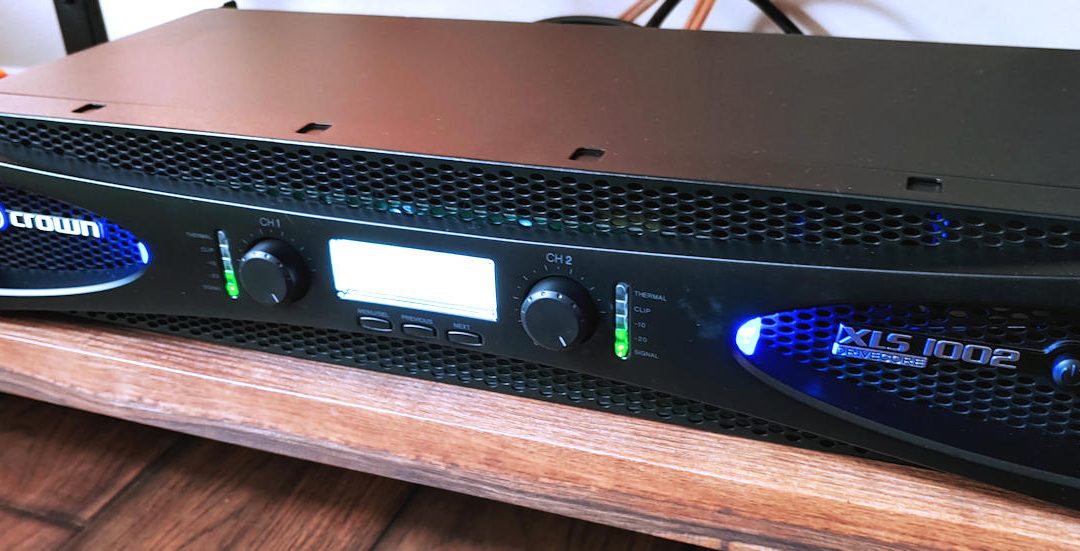 First off, thanks to Sam Ash Music for the excellent deal on the Crown XLS1002 amp.

Search any audio gear forum looking up DIY subwoofer topics and you’ll see how popular it is for people to use amplifiers made for pro audio applications, much like Crown’s lineup, in their home theater setup. For the wattage available, this is actually pretty price competitive versus buying a typical powered subwoofer.

So while the Crown XLS1002 is a 2-channel amp capable of full range output for PA systems, in my case I used it in bridged mode and took advantage of its built-in DSP crossover to power a few different subwoofers.

If you’re looking for a capable subwoofer amp as well, this review is for you.

Crown’s entire XLS lineup features a built-in DSP that you can control via a front panel display with 3 buttons. You can adjust things like:

The back panel features XLR/TRS inputs as well as RCA inputs for maximum flexibility. Speaker outputs are screw-down type, which accepts bare wire or banana plugs. You can also use Speakon plugs.

What became immediately clear once I got the gain and other settings dialed in is how strained my previous amps had been (150-350W RMS). The bass using the XLS1002 was tight, very articulate, and CLEAN.

Running the amp in bridged mode at 8 ohms provides 700W RMS to the subwoofer. I felt comfortable pairing that with an Infinity Kappa 12-inch subwoofer rated at 350W RMS largely because of a build philosophy Crown shares in favor of using an amp with more power than the speakers. In short:

Thus far I can confirm that the subwoofer withstands heavy bass well. I’ve gone as far as using an overall system volume you might describe as a good jam session, but not so loud that the neighbors are calling the cops. Even songs like “Turn Down For What” sound clean and free of distortion, and that’s certainly a song that will give your subs a workout.

I auditioned all kinds of music, from Fleetwood Mac and Eagles to Pearl Jam, from Moby to Nine Inch Nails, from Seal to Dr. Dre.

The power the XLS1002 provides really brought my subwoofer to life and gave it the punchiness I’d been somewhat disappointed it lacked before. I already thought the Infinity Kappa was a good sub even used in the living room, but now I can definitely say that it benefits from strong amplification. (More than other subs I’ve auditioned that are more forgiving of a weaker amp.)

Bass guitars and kick drums were present in a way they hadn’t before. Not overpowering to the rest of the system, but fully there in a way that changed the way my wife and I engaged with certain songs. There was a pleasant warmth in country and softer rock music, and a satisfying oomf to heavier rock music — without being muddy or putting more bass into the music than sounds right. But for bass-heavy genres like dubstep or rap that demand a lot of power the amp provides plenty for bass drops. The limiter really is the sub, I think, and whether it can take all this power for those settings.

90% of the time the Infinity Kappa stayed clean and controlled, but in the highest volume listening sessions there were a few songs (or moments on movies) where it was clear either the woofer cone was nearing Xmax or the box it was in needed to be bigger/more solid. An ideal situation if you’re using bridged mode long term, especially at volume levels some prefer for movies, would be a dual sub or very large and powerful sub. I have my eye on the Dayton Audio Ultimax 15″ for just that setting.

(Otherwise, you could simply use 2-channel output and run one sub out of each channel at a much less intense 350W per sub.)

Crown’s power philosophy rings true especially for movies and TV shows, where burst sounds like gunshots, explosions, or weather sounds much more visceral and realistic than before because of all the amp headroom for peaks.

I have some rattle in air vents and other objects in the rear of the room to address now. Though my wife seemed a little disappointed to hear them, I was impressed this amp could drive that effect out of one 12-inch subwoofer. With a dual sub setup, which this amp is totally capable of, or using a larger driver sub this amp could really put out enough power to rattle some walls.

The visible level indicator LEDs on the front panel are super useful, not simply for initially setting the gain but also for getting an idea during general usage of how much amp power is essentially being used against what you’re hearing.

My Harmon Kardon receiver has a fairly weak LFE RCA output, so even with the Crown’s gain maxed I don’t generally see levels higher than 2 of the 4 bars on the Crown — even during loud peaks. Yet it’s plenty loud. This tells me I have lots of headroom and volume level in my living room is only limited by what the subwoofer can handle and not the Crown driving it.

Heat-wise I’ve never even heard the cooling fan within the XLS1002 kick in, even after hours of watching loud movies or bassy music. The amp only got fairly warm to the touch when I briefly powered two subwoofers in bridged 4 ohm mode (1100W RMS), so I suppose if you ran it hard at that level it would get hot enough to need the fan.

For my tests, however, the amp delivering that much power with that little heat is a very reassuring sign of the amp’s efficiency. Not surprising in a way for a Class D design, but I’d not used an amp with that much power before so I wasn’t sure what to expect.

The gain control knobs on each channel have a nice tactile feel, with definitive “clicks” up and down for easy adjustments. For instance, it’s far easier to match both channels if you know “4 clicks down from max” instead of trying to eyeball it if it was a smooth rotation.

The display panel is operated with 3 buttons just below it: Menu, Previous, and Next. Holding the Menu button for 1 second opens the menu, where you can use the Previous and Next buttons to scroll to areas you want, hitting Menu again to select them. I found this simple to use and understand.

A good balance of giving some useful features without being convoluted.

Being able to digitally set the low-pass filter at 80hz rather than guesstimating where 80hz is on a relatively unmarked dial (like many other amps) is a big plus. Bandpass mode also seems useful if you’re using ported/bass reflex boxes for your subwoofer(s) since the cone can lose control below port tuning. People often say this can cause bottoming out at the lowest subsonic frequencies.

Bandpass mode allows you to specify both a high-pass and low-pass filter, such as saying “filter out anything below 30hz and anything about 85hz.” Unfortunately the XLS1002 doesn’t allow you to high-pass lower than 30hz. Personally I would’ve preferred 20-25hz as a minimum.

I’m using a sealed box, so I didn’t notice much benefit to bandpass mode and went back to a simple low-pass mode.

The front panel is also where you tell the amp which output mode you want to use, whether you’re connecting stereo speakers, bi-amping (two independent output channels), or bridged mode. Bi-amping allows you to do things such as running a full-range speaker out of channel 1 and a subwoofer out of channel 2, for instance, and using separate crossover controls for each.

I appreciate that Crown included RCA inputs on the back in addition to the XLR and TRS plus common to pro audio amps. Many of the other pro audio amps I’ve looked at don’t feature RCA connections since they’re less commonly used by DJs, but it really does give extra flexibility in this case for home usage.

I could’ve gotten by with RCA->1/4″ TRS adapters I have on hand, but for someone without it’s nice not to have to buy anything extra.

This amp also has an input sensitivity level adjustment on the front panel, toggled between 1.4V typical of pro audio equipment for DJs, and 0.775V that is more common in consumer home stereo equipment. This is a nice add-in to ensure that whatever devices this amp is connected to it can still deliver its full power.

Crown XLS1002 As A Subwoofer Amp: The Verdict

You can tell when you’re using a good quality amp when it makes quality speakers shine.

For instance, I also auditioned this amp with a Kicker CVR subwoofer and though it sounded decent its lack of composure in the 70-100hz range shone through all the more with the extra power. The Infinity Kappa on the other hand, a sub with a much more balanced/controlled range, took on a much more enjoyable character with the XLS1002 versus amp solutions I’d used previously.

This amp would be solid for two large floorstanding speakers with big woofers used in stereo mode since the 2-channel power would drive them better than a standard receiver. And in bridged mode for subwoofers, 700-1100W RMS is probably plenty for most people. If you do need more power for a large room with a bunch of monster subs, the XLS1502 might be perfect since it can do 1500W RMS.

For the foreseeable future the Crown XLS1002 will remain a daily part of my system, having thoroughly earned its place. I look forward to getting my hands on new subs (and more of them) to see how the Crown can drive those.

Grab yours on Amazon here and help support the site. Thanks for reading!

For anyone curious, here’s the setup I used: