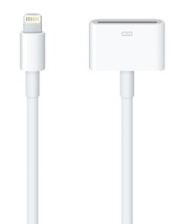 Apple announces that those that ordered the 30-pin to “Lightning” adapter may soon finally have one. This has made headlines as exciting news, but examine the wording of that sentence. Really, Apple?

It’s bad enough that once again you release a device where you are woefully understocked for, with even those that pre-ordered having to wait to get one for weeks. “We couldn’t anticipate the popularity.” I know that after 5 models of the phone that had people camping outside of Best Buys and other stores you can’t possibly be surprised by the demand your new phone would have. Apple’s tactic of creating artificial scarcity is, however, fairly well known.

If they’re changing the proprietary plug that every Apple device has always used until now, they’re going to give an adapter right?

From recent articles I’ve read it doesn’t seem that this is included with the iPhone 5, and per the headline above they’re just now announcing that it’s available for new iPhone 5 users for $29 and $39 (in two sizes). Apparently they didn’t anticipate the “unprecedented” need for those adapters, either, despite having made the change that necessitated them before the iPhone 5 was even released.

This sounds a lot like one of those scenarios I like to refer to as “You’re either that stupid or that much of an asshole.” Either Apple is exploiting the hell of out gullible people willing to wait and pay any outrageous price, or they have a pattern of being completely disorganized during every major release. In either case…really? I’ve never been a huge Apple fan but admit to having warmed up to it a lot in the last year. It’s difficult to defend some of their antics, though.

But other smartphones don’t come with converters, and you aren’t picking on them!

True, but then most other smartphone manufacturers use standardized plugs (mini and now micro USB). If you’re transitioning from an old mini-USB device to a micro-USB you probably weren’t provided a converter, but the ubiquity of micro-USB adapters make them inexpensive. Certainly not $39. Adapters and interfaces change, inevitably, and it’s the mark of change and improvement in technology. I get that.

But if you’re going to make a sudden change that feels more like an excuse to make people buy something because they can’t use the old one they already have, you don’t have to laugh quite so loudly all the way to the bank doing it.