The Galaxy Note 5 Hands On

As a long time Android user I was very excited to upgrade to the Galaxy Note 5. A couple years ago when I was looking at the Galaxy S4, I was also comparing it to the Note 2. That big screen was tempting, but at the time I figured that it’d be too big for my pocket and hard to carry around. I was happy with the S4 for the two years I had it, but I’d always sort of regretted not going with the bigger screen with how much reading and such I do throughout the day. People referred to the S4 as a “phablet”, but it always felt like just a smartphone to me.

Everything about the Note 5 seems bigger — beyond the obvious 5.7″ screen that actually feels like a small tablet. The bottom-mounted speaker is much easier to hear while the phone is sitting on a desk, and the volume in general even in calls seemed more, well, voluminous. I used to need the call volume at probably 80% to hear people well on the S4, whereas 50% is ok with the Note 5. With notifications it was similar: 75% or so on the S4, 40-50% on the Note 5.

The processor is obviously faster, which was to be expected on any phone 2 years later. But 4GB of RAM!

Battery life seems good, at least to me. I can use the phone for web browsing, social media, texts, calls, and emails all day and end up with about 45% by 8pm or so, so it’s easily viable throughout a work day. And with its fast 3A charger you can juice up quickly throughout the day if needed.

I’ll start with general use impressions (the mini review) and then delve into sub-areas if you’re interested.

The move from a 5″ screen to a 5.7″ screen feels huge, and will be much more pronounced if you had a smaller phone (or an iPhone that wasn’t a Plus size). With the amount of reading I do the big screen helps prevent eye strain, as does the screen res. And of course videos and games always benefit from more screen.

Despite its size the Note 5 still fits in a pocket pretty well and isn’t hard to hold. One handed holding and typing is a little challenging unless you have big hands, but triple-tapping the home button enables “One Handed Operation” that shrinks the screen and allows you to pan left or right for whichever hand you want to use. Cool feature for those that do a lot of that. Most of my usage is one handed reading or both hands to type, so the large screen hasn’t been an issue for me.

This phone was my first experience with voice over LTE (VoLTE). As I understand it, VoLTE uses 4G LTE where available during calls to enhance the call quality, which takes advantage of the increasingly superior 4G network. Call clarity is slightly better and louder on the Note 5 than previous phones I’ve had, but it’s unclear whether that’s simply superior hardware in the phone or the VoLTE.

And what would a review of a Note be without mentioning the stylus? Apps like S Note are great for grocery lists, to-do lists, or something you think of while out and about. I’ve often found myself wishing I had one of those pocket sized spiral notebooks with me for random ideas, but I often forget to bring it. With S Note, you can get the same perk (and multi-page note functionality) anywhere.

The S Pen also works like your finger for typing (and Swype), scrolling, etc. This can be useful to avoid smudging the screen, and gives you extra precision. The S Pen also has its own menu for shortcuts and cropping sections of the screen for screenshots, but that’s fully explained in a good video I recommend below.

I was reluctant about the Note 5 at first because every smartphone I’ve owned has had a removable battery door and ability to add a microSD card. This is a feature all Notes have had through the 4, but apparently Samsung decided to do away with on the 5.

The absence of a microSD card was mitigated by getting a 64GB version of the phablet, but time will tell if I come to regret not being able to change out the battery.

One thing I have come to appreciate about the sealed design is the comparison of speaker phone to my Galaxy S4. On the S4 the speaker was mounted on the back, and when volumes were over 50% it caused the plastic back to rattle, which caused a distracting amount of distortion to the sound. Both because the Note 5’s speaker is on the bottom and because the back is solid this hasn’t been an issue. Voices are clear at much higher speaker phone volumes.

The Note 5 is an attractive phone. Overall shape is similar to all Galaxy devices, but the Note 5 features a Gorilla Glass back and metallic trim. These go a long way toward giving the phone a premium feel. The Galaxy S4 was a nice phone, but the plastic body did not elicit the feeling of “I’m holding a top of the line device.”

That said, it’s somewhat moot to me because I’d never own an $800 piece of technology without a case. Once you slap a case on the phone you don’t notice the glass back or any of that.

I didn’t think I’d like the headphone jack being on the bottom, but it’s actually handy for in-car music listening if you’re also charging because all the cords are together and not sticking out of various ends of the phone. The volume and power buttons are laid out similarly to other Galaxy devices, so if you’ve used them before it won’t be much of a change. Of course if you had an LG G series phone it’ll be a bit of a shift from it being on the back.

Other than that, the screen edges on the right and left sides go almost to the very edge of the phone, and give a very large and vibrant viewing area. 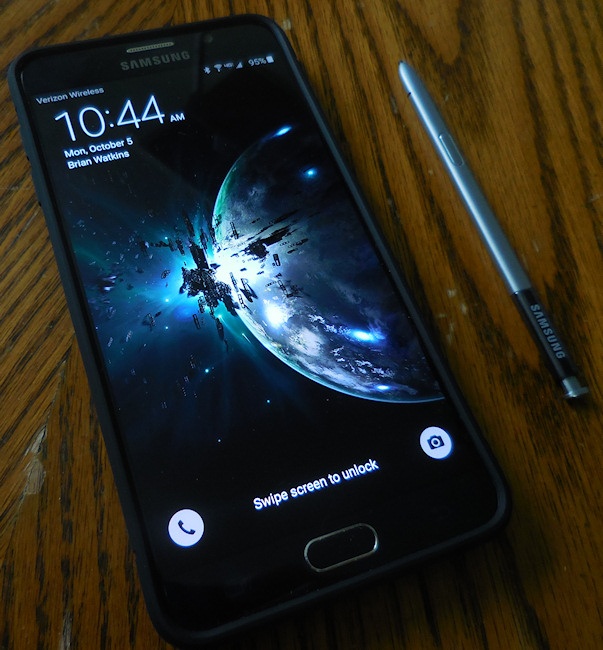 I was both excited and skeptical about the 8-core CPU. On one hand, awesome, but on the other hand I couldn’t help thinking “I don’t even multitask my PC hard enough to max out 4 cores; how could I possibly need 8 on a phone where I’m doing even less at once?”

Here is an interesting explanation of how the S6 uses all 8 cores and how the Android OS utilizes a lot of parallel processing. It’s relevant here because the Note 5 and S6 have very similar hardware. Of course there are other studies that still show that Apple’s 64-bit dual core CPU in the iPhone 6 and 6S equal or beat all these extra cores, but those are also benchmarks and not real world usage.

With all that said, the Note 5 feels very fast. Jumping between apps is smooth, and opening most apps is nearly instantaneous. Loads times on web pages were an improvement over my former S4 — likely a product of the faster CPU and double the RAM. A lot of people only look at network speeds to gauge their web browsing experience, but remember: the browser has to decode a lot of HTML/CSS to render the site. And something has to process all that, right?

The Note 5’s class-leading OLED 2560×1440 resolution screen is beautiful. I admit that previously I’d assumed claims of “Quad HD” screens were mostly marketing and that it was unlikely to matter on a small screen to go beyond HD. But text is definitely sharper.

Colors are vivid and bright which is par for the course on all Samsung phones, but the Note 5 also features screen modes to favor intensity, color accuracy, or battery-savings.

One area I actually noticed the biggest difference from the screen resolution is when taking photos. Sure, the 16MP camera is nice in itself, but reviewing the photos on the phone screen really benefits from the extra resolution. The Galaxy S4 for example could take photos over 4290×2800 pixels, but you’re looking at them on a 1920×1080 screen. I didn’t notice as huge of a difference in the photos off the phone, but the first few I took on the Note 5 and reviewed wowed me on screen.

After a recent Verizon update there’s one minor glitch I’ve noticed. If you’re using voice to text in say a text message, send your message, and let the screen turn off with the voice to text box still up, when you turn the screen back on it’ll be stuck there. You can close apps and return to the home screen but it will stay on the bottom of the screen and cannot be closed. Only a reboot seems to correct it. Some recommend a factory reset after the update to correct that, but without an SD card to back up data it’s annoying to lose all your stuff.

Even with Google’s app/data backup there are still things you lose.

Otherwise I’ve been very happy with the Note 5. It’s fast, has plenty of RAM for multitasking, and the S Pen allows for a lot of productivity use cases. And the big 5.7″ screen makes for a comfortable reading and entertainment experience.