A ways back the folks at Mozilla announced a big new release for Firefox both visually and functionally. At that time there was little info about when users could expect it, causing some anticipation with the variety of teaser images released. Now that some development time has passed, let’s take another look at it. 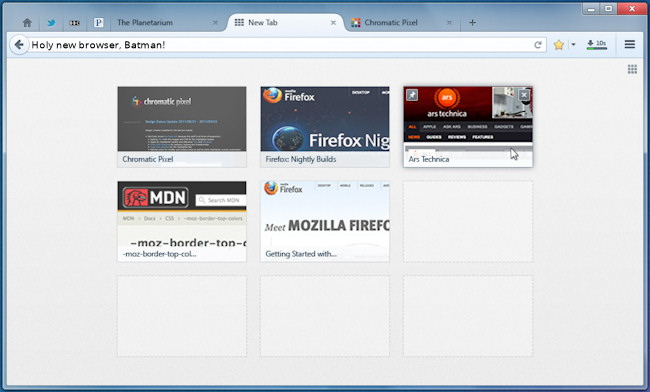 Computer World points out that while the current Australis release date is six weeks behind the earlier projection, it’s currently slated for April. (Dates vary; some sites say April 4 and others by the 28th.)

Australis screenshots indicate the update will provide a much needed visual touch to the browser, smoothing out it’s stark square tabs. In Mozilla’s own article about Australis features, we see that more attention has been paid to user experience with background tab-dimming, new menus, and small touches throughout that hide things people don’t use as much for visual simplicity and aim to make it easier to access things people do use most.

That same Computer World article quotes some individuals who are apparently not looking forward to the new look and threaten to backtrack to an older version of Firefox when that hits. Others compare the new look to Chrome, and seem to ask what the point of going this visual direction is when Chrome has already done it.

Australis seems sleeker and finer tuned than Chrome’s appearance, but even in their similarities I don’t see the disadvantage. At worst Firefox becomes a quasi Chrome lookalike without the privacy concerns, but even that seems overly negative.

People seem to hone in on anything that can be a perceived copy of other browsers, particularly Firefox to Chrome. When Firefox 4 was released (where the UI of Firefox became more Chrome-like and streamlined) everyone rabbled in dramatic cries that it was the end of Firefox.

While not embraced by everyone (some played with customization options to make it look more like older versions) by and large it’s a move that’s been accepted and embraced by most. What was a browser like Firefox to do at that point amidst a visual evolution all other browsers were moving toward? What good does it ultimately do to refuse to adopt a popular and arguably more sensible design merely to proclaim proudly you don’t look like anyone else?

You’d end up like Internet Explorer 10 and 11, having changed its appearance from its older version but also appearing different than other popular browsers. Except that most of the contrast felt like deliberately doing something different for the sake of being different, rather than because it was better.

What do you think? Looking forward to Australis’ release or do you have concerns?