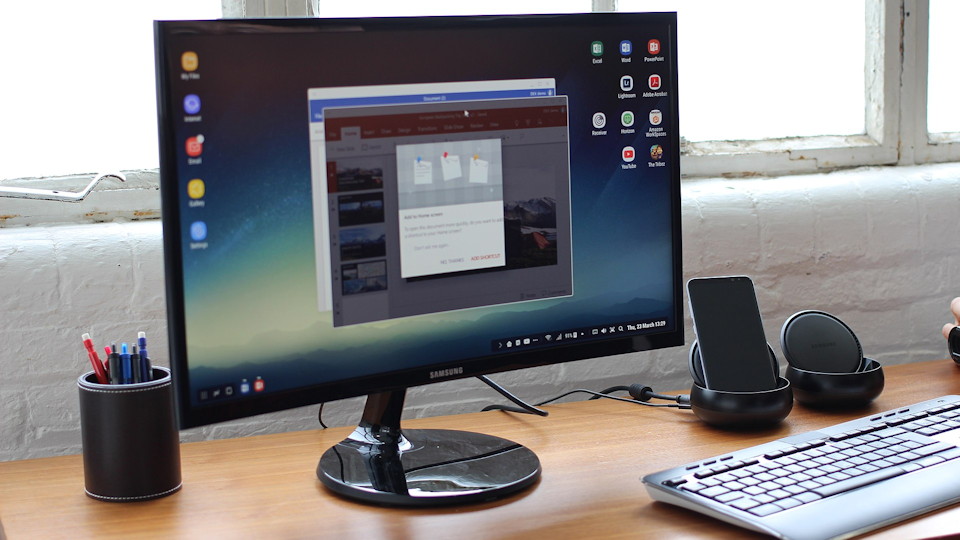 With devices like Microsoft’s Surface Tablet the idea of having one mobile device you can run your whole life through is now a thing. But I was impressed today reading about something a lot of people probably didn’t know. With Samsung DeX dock, you can take advantage of some awesome advances in hardware to essentially turn your smartphone into a desktop PC.

The Samsung DeX utilizes this port while cradling your phone, turning your USB-C port into a hybrid connection that can go to a keyboard, mouse, and monitor. The experience at that point is pretty similar to using a desktop PC. As you can see in the screenshots from their site, Android even formats the screen on an external monitor to look more like a desktop experience.

USB-C 1.1 is reportedly capable of carrying 15W of power (compared to USB 2.0’s 2.5W) as well as 10Gbps of data. That’s certainly enough bandwidth to cover several devices at once through a single port, and pretty well future proofed.

Relatedly, what other things can Android phone with USB-C use?

The short answer is pretty much any USB-enabled device. Things like USB-powered fans and lights mostly work, people report. Probably more importantly, you can use a wide variety of external storage drives and flash drives, which your Android phone will see as such and allow you to browse, open, or copy files.

I’ve even personally used a Blue Yeti mic with my Android phone by attaching the phone’s included USB-A to USB-C adapter. This basically changed the Yeti’s cable so that it had it’s default mini-USB port on one end that goes into the mic, but the other end of the cable that normally has a full size USB plug was now USB-C and could be inserted into my phone.

Having used bluetooth keyboards with my phone in the past, I can affirm that it indeed made typing at length far more comfortable. Imagining having a large external screen as well?