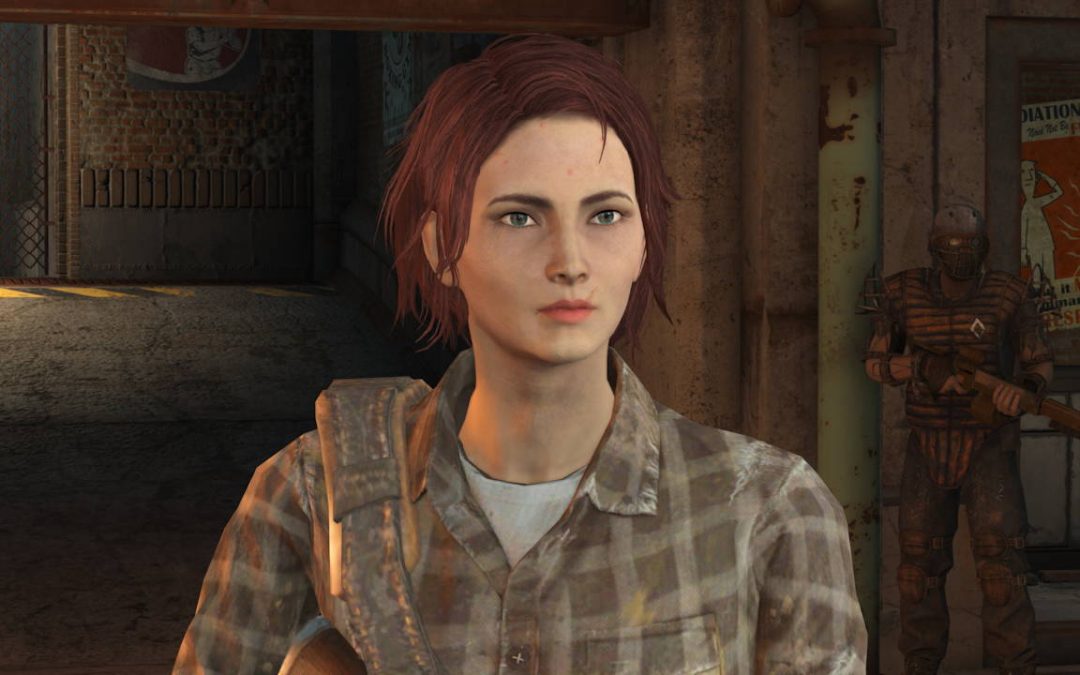 This is actually a mod I tried years ago and for whatever reason didn’t review at the time. But as a suggestion from a commenter and simply as something that makes sense with how many Fallout mod reviews I’ve already done, let’s dive into this companion mod.

Ellen the Cartographer is voiced by PotasticPanda, which people frequently note was the voice actress for Skyrim’s popular “Recorder” companion mod.

When this mod was first released it had among the most voiced lines of dialogue of any companion mod with the exception of perhaps Heather Casdin.

After firing up the game and playing around with the mod again to refresh my memory a bit, here is the break down:

It feels organic, and the recording quality of her voice is excellent. Poorly recorded vocals can really seem jarring, making it obvious a character is a mod character and not a normal part of the game, so it’s always refreshing to hear a well-voiced, well-recorded character that blends right in to the experience.

The voice acting and sound quality are up there with the best I’ve heard from Fallout 4 mods.

However, despite the high number of overall recorded lines the mod has, I found that Ellen’s comments about my looting containers and enemies got repetitive fast.

After an hour or two of playing the game with her in tow I was getting sick of the comments. (More so than even vanilla companions.)

Without the author having to add more recorded line variations, a simple fix would be to make her chime in less often.

Without discussing spoilers in the later parts of Ellen’s quests, I like the integration into the game world. She’s hanging out in Diamond City’s Dugout Inn when you first meet her, looking for someone to help her travel the Commonwealth and flesh out maps she’s making.

One criticism I’d raise about her quest story is that it culminates in Quincy, which is home to very high level Gunners with rocket launchers, Fatmans, and swarms of enemies that are very tough.

Best for higher level characters, but a couple times I used Ellen I ran into the situation where I’d progressed into her quest line at a much earlier level than going to Quincy made sense. It strained roleplaying a bit for her to ask me to go there and for my character to agree, and then ignore it for a good while to power up.

Not tying Ellen’s necessary companion progression to one of the harder fights in the game would make it a bit more accessible.

The only other criticism I can think of for Ellen’s quests, without spoilers, is that the dialogue in the final phases of the quests makes it seem like winning the speech challenges allows for a different ending, but it doesn’t.

Everything plays out pretty much exactly the same regardless of what you do. Minor gripe, but worth noting.

Why that’s worth mentioning: The vanilla game has very few moments where a smart, charismatic character can actually affect how things play out as it is, so it’s always refreshing when a mod does this well.

While I applaud the mod author’s creation of a character with set motivations and preferences, aspects of Ellen’s personality play a big role in whether I bring her along or not from one play through to another.

Depending on your character’s setup, she may not make sense as a companion at all.

For instance, she not only dislikes chem use (losing affinity) but makes pretty judgy remarks about it like, “Oh, I didn’t think you were the type of person that used chems…”

While it’s certainly realistic that some people would be uncomfortable about traveling with someone shooting up Med-X and Psycho, so many of my melee builds depend on these powerful chems that having a companion that’s getting pissed off every time I turn into the Incredible Hulk is a bummer.

Ellen also dislikes you bargaining for more money when taking jobs, and hates working with the Brotherhood of Steel. The latter usually isn’t a problem for me since I rarely do a play through with them, but her getting upset every time a savvy character haggles a bit is another bummer.

However, this mod is compatible with AFT (Amazing Follower Tweaks). One of AFT’s features is being able to neutralize or reverse a follower’s like/dislike reactions, so a possible workaround for you is to use that to null out Ellen’s dislike for chems and haggling.

The dialogue for the optional romance at max affinity is somewhat amusing. Not a bad thing because I think it fits Ellen’s personality, but it’s sort of an awkward transition from friends to something more.

I’ve used this mod in a few different playthroughs with different combinations of other mods and haven’t had any issues that come to mind.

This mod does alter the Quincy area, so running it alongside other mods that do the same may produce issues.

Affinity gains and conversations all worked properly, and I didn’t have any glitches or crashes playing through Ellen’s quests.

Note that the bugs session of the mod page does show that other users have had various issues running the mod, from holotapes for quests not spawning to CTD in certain scenarios. I’d recommend reviewing those before adding them to your game.

(Sometimes their issues are due to other mods, etc. and may not be relevant to your situation.)

A fun observation: The Tales From The Commonwealth mod, among many other things, adds a character called Niah at a little shop who is voiced by the same woman that voices Ellen. Niah even looks a little bit like Ellen, so if you’re running both mods this is an amusing crossover.

Overall I’d give this mod a B+. It’s worth a download.