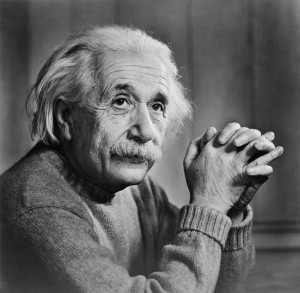 “The definition of insanity is doing the same thing over and over and expecting different results.”

We’ve all probably heard this quote, most frequently attributed to Albert Einstein. It’s one of those nuggets that gets repeated so often that it’s taken without question, but there is actually no evidence that Einstein ever said it. In fact, this quotation has also been attributed to Mark Twain and Ben Franklin, and it’s unclear if they said it either (Hypercrit.net).

Where did it begin? One of the earlier references was by physicist Gad Yaacobi in 1996, according to Wikipedia. In fact, mis-attributing Einstein is so common the Wikipedia page for him has a whole section on it!

At worst, doing the same thing over and over and expecting different results is foolish. You could accuse the person of poor judgement or of sluggishly learning from their mistakes, but as unfortunate as being foolish is it’s hardly insane. Second of all, you can play the other side of the argument by pointing out that assuming “doing the same thing can’t produce different results” conflicts with well-accepted concepts like chaos theory. To use a simple example, one person can repeat a behavior many times, and because of uncontrollable outside influence different results are not only possible but fairly likely.

Why is it that dripping water on your hand in precisely the same location does not always cause it to run off in the same direction? Why is it that flipping a coin in the same way over and over does not always cause it to land on the same side? Even on a mechanical production line that replicates the same motion with mathematical certainty there are still occasionally minute variations. Hell, a lot of scientific experiments rely on repeating a procedure and looking for varying results.

What are your thoughts?