Baldur’s Gate Enhanced Edition (BGEE) was, for many, a welcomed update for an old but beloved game. While more recent offerings in the same spirit such as Dragon Age and Mass Effect blend great storytelling with much more powerful technology, for many gamers there has long been an allure to old classics that really set the bar in their day. (Read the overview for Baldur’s Gate 2 Enhanced Edition here.) 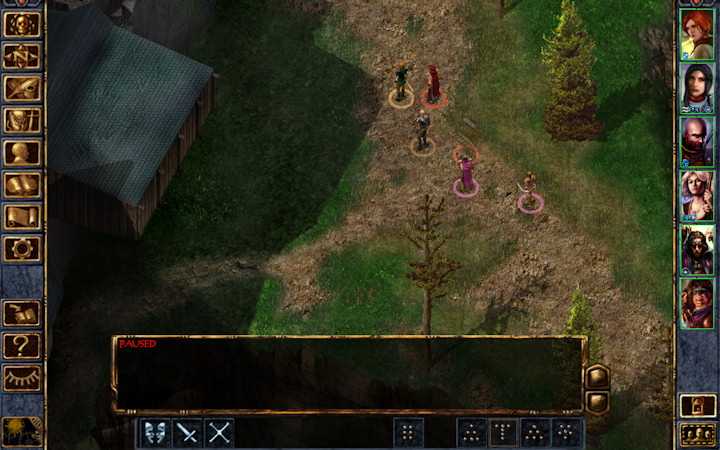 This enhance edition solves many of the problems that have cropped up over the years, such as using widescreen monitors on a game designed for 4:3 and much lower resolutions. Graphics and menus have gotten a bit of a face lift, and many of the popular tweaks/fixes that had been applied by fans through mods and patches have all been rolled into the new ‘default’ game. This saves time and unifies those fixes for better compatibility.

It’s important to note that BGEE uses BG2’s engine, so certain mods and tweaks that work for the second game should work for the first as a result — some of which I have verified. Many mods, though, are being re-released in EE-specific versions for easier integration.

The game also incorporates new NPCs, complete with interactions and dialogues akin to what Baldur’s Gate II had incorporated, but had been missing from the first game. This had previously been alleviated a bit with a well done NPC mod that added interactions and even romance plots into the game. When that mod is re-configured for EE, the combination of those interactions with the new NPCs will be great.

For those not familiar with blackguards, it’s essentially the anti-Paladin. As such, Dorn works best in evil or neutral parties. His 19 strength and starting equipment (+1 great sword) make him a solid choice early game, and he can be easily recruited before players get too far into the story.

He’s essentially an even more powerful Minsc, and the best warrior in the game for evil parties that were previously limited to Kagain (16 strength) or Shar-Teel (9 constitution).

The wild mage kit is singlehandedly the best and worst aspect of having Neera in your party. On the plus side, her addition allows players to use this Throne of Bhaal class without having to play as one. Wild mages can add a fun layer of power and uncertainty to a game, which may appeal to experienced players looking for unique strategies and challenges. It also functions as a specialist mage without an opposition school, granting extra spells per level and the chance to randomly cast spells at slightly higher than actual spell level.

On the other hand, the unpredictability of wild mages may not be an ideal choice for newer players. For those new to the game and wondering why, basically a wild mage has a percent chance with any spell cast (including from scrolls) to create a wild surge with random effects. Sometimes it’s a positive effect as a boost to the party or a destructive effect toward enemies that is more powerful than the spell that had been cast. Other times, though, it can be devastating to the party — especially at lower levels.

Kits aside, Neera is a good choice for any alignment party because she’s chaotic neutral. Her personality is somewhat playful and sarcastic, and she is available as a romance option for male heroes. Her romance, especially as it carries into Baldur’s Gate 2 Enhanced Edition, is a refreshing change of pace as it doesn’t require her throwing her problems in your face like all the original romances.

Rasaad the Monk of Selune

Rasaad is eager to share Selune’s teachings with others, something that is apparent the first time the player meets him. He’s not overly preachy, though, and will generally work well with any good or neutral aligned party. His personal quest takes players into the Cloud Peaks, which is available as a new map area.

As a monk class, Rasaad suffers from a bit of a slow start. His fist weapons are initially unimpressive, and at low levels he hasn’t built up enough monk AC bonuses to be much of a tank. Late into the first Enhanced Edition he’ll have some decent momentum built up, especially with the right equipment choices. As with all monks, in Baldur’s Gate 2 he will become extremely powerful with a solid balance of AC, attacks per round, and damage per attack.

A Couple Great Sites For Baldur’s Gate Mods in General Are: